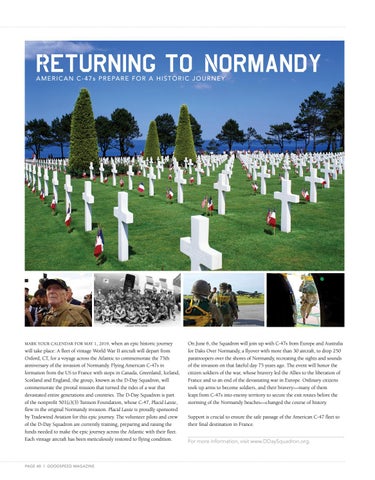 when an epic historic journey will take place: A fleet of vintage World War II aircraft will depart from Oxford, CT, for a voyage across the Atlantic to commemorate the 75th anniversary of the invasion of Normandy. Flying American C-47s in formation from the US to France with stops in Canada, Greenland, Iceland, Scotland and England, the group, known as the D-Day Squadron, will commemorate the pivotal mission that turned the tides of a war that devastated entire generations and countries. The D-Day Squadron is part of the nonprofit 501(c)(3) Tunison Foundation, whose C-47, Placid Lassie, flew in the original Normandy invasion. Placid Lassie is proudly sponsored by Tradewind Aviation for this epic journey. The volunteer pilots and crew of the D-Day Squadron are currently training, preparing and raising the funds needed to make the epic journey across the Atlantic with their fleet. Each vintage aircraft has been meticulously restored to flying condition. MARK YOUR CALENDAR FOR MAY 1, 2019,

On June 6, the Squadron will join up with C-47s from Europe and Australia for Daks Over Normandy, a flyover with more than 30 aircraft, to drop 250 paratroopers over the shores of Normandy, recreating the sights and sounds of the invasion on that fateful day 75 years ago. The event will honor the citizen soldiers of the war, whose bravery led the Allies to the liberation of France and to an end of the devastating war in Europe. Ordinary citizens took up arms to become soldiers, and their braveryâ&amp;#x20AC;&amp;#x201D;many of them leapt from C-47s into enemy territory to secure the exit routes before the storming of the Normandy beachesâ&amp;#x20AC;&amp;#x201D;changed the course of history. Support is crucial to ensure the safe passage of the American C-47 fleet to their final destination in France. For more information, visit www.DDaySquadron.org.

A luxury inflight magazine from Tradewind Aviation, highlighting the latest and greatest from their distinct destinations. 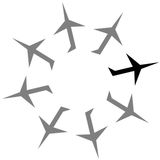