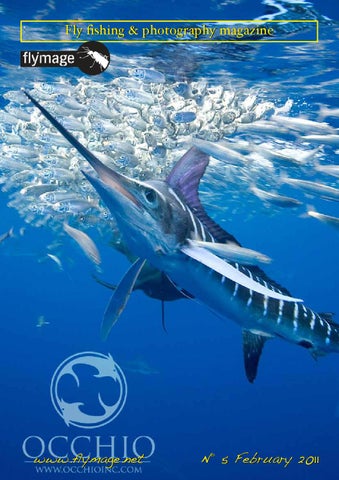 In this issue we pay special attention to big fish. Big fih caught with Bush Pig flies, a reference in the world of prey fish imitations, the amazing work of a great underwater photographer, Marc Montocchio and his shots of marlin and sailfish hunting fish in open water, or dorado in Argentine waters of two small rivers in the Yungas forest.

It is a privilege to have the pictures of Marc Montocchio in this issue of Flymage. Marc has specialized in billfish photograph in the wild, hunting on schools of prey fish. The cover is just an appetizer of what comes next... Contributors in this issue: Earl Hamilton, Marc Montocchio, Chip Drozenski, Agustín García Bastons, Remington Kendall, Juan E. Álvarez.

Tying the Bush Pig. The original step by step instructions.

Marc Montocchio shows us some of the photos that have made him to achieve a great reputation between underwater photographers worldwide.

Would you like to fish for dorado in small mountain streams sight fishing? Discover the Yunga forest and rivers Dorado and Valle in Argentina.

Originally designed for barramundi fishing in Australia, the name Bush Pig was derived from the inherent properties of the fly being a pig to cast, and having to throw it at the bushes!

Left, Earl Hamilton owner of DNA Fly Fishing with a dogtooth tuna in the Great Barrier Reef, Australia. Ocean Pacific Leisure, started by Earl Hamilton in 2001, is a salt water specialist commercial fly tying operation, and is the parent company of DNA. Earl felt he needed to create a material that would better suite what he needed to make medium sized salt water flies, with more mobility in the materials that had more movement for the sizes and pattern types most required.

Same Bush Pig fly was used to fool this barracuda in southern Spain.

A nice largemouth bass caught while feeding on bleak.

The first ever Bush Pig.

Autumn in the Gibraltar Strait. At sunset, barracuda, bluefish and bonito feed on flying fish that are concentrated in the bay.

This barracuda attacked a blue Bush Pig before it hit the water, like a flying fish caught in flight.

tying the bush pig Earl Hamilton sent us the tying instructions for the Bush Pig. Keep the step by step to get the original fly. Materials preparation The material bunches are twice the length needed because they are folded back on themselves. First, having selected the bunch of fibers which would be about 1/8 of an inch in diameter, you need to fold in half, and cut the loose ends about Â˝ of an inch shorter than needed. Do not cut the folded end. This is because you now unfold the fibers and uneven the ends by sliding them backwards and forwards between your thumb and forefinger for about a half inch. This should uneven the ends and increase the length by a Â˝ inch at either end.

Tie in a bunch of prepared material with 2 turns of thread on the shank over the point and the barb, with the trailing half (lenth”A”) about 1/4th longer than the forward half (length “B”)

Then fold back the forward half to trail the hook. This is easiest to achieve using the body of a BIC pen pushed over the eye, and slid along the shank to push the forward fibers back over the tail

END STEP 3 This is a repeat process of step one, only that the bunch of fibers are only ¾ the length of the fiber for step one, and again are tied in ¼ longer behind than in front.

Hold the fibers back with a free hand and secure at the base with 3-4 close turns of thread at the base and 2 turns around the shank.. Add a drop of super glue at the base

Finish as before, in end step 3 END STEP 4

Step five is a repeat of step 4, but a bunch of fibers 他 length of those in step 4. Glue at base. STEP 6

For step 6 the fiber is half the length of those in step 5, and in this case they are the color for the back of the fly. The fibers are tied in at equal length forward and trailing with 2 loose turns at a position which should be by this step about 1/3rd of the tying length of the fly. Adjust the fibers to go around the top half of the shank. Then tighten the turns so they are firm. Add another bunch of fibers equal to the length to the top bunch of fibers underneath the hook shank for the belly of the fly in the color required,. Tie these in with 2 loose turns; spread the fibers round the underneath half of the shank, then tighten up the turns to hold everything firm. Fold back the fibers evenly then finish as before.

Fold back the fibers evenly, then finish as before. END STEP 6

For step 7 the process continues as before, and the back fibers are 他 length of those in step 6and are tied in with the trailing half the same length as the trailing fibers on the top of the shank in step 6 The belly fibers are equal to the top fibers, with the back half the same as the top of the back. Folded back the fibers should reach the position as marked on the hook by the broken line in the illustration. Fold back and glue the fibers as before. END STEP 7

In step 8, the back fibers remain as before in step 7, and are tied in the same 他 format as before, but the belly fibers tied in underneath are beginning to get a bit shorter than the top, and when folded back the ends would follow the contour of the point towards the eye of the hook. END STEP 8

Glue the base as before. By now you should see the profile of the fly really taking shape. Note how the ends of the fibers follow the contour of the hooks point in the illustration.

STEP 9 Step 8 sets the precedent for the format to follow in step 9, 10 and onward depending on the size of the hook-a 6/0 will take 12-14 steps to complete the fly, a 4/0 10-12, and a 2/0 8-9. Of course this depends on the diameter of your bunches, and the spacing along the hook shank-but it should be remembered that the final 2 or 3 steps should be packed tighter together to create the surface that really pushes the water and generates the sonic signature.

The final fly should look something like this illustration.

ick Wintertons gold bomber fly, was the basic chassis for developing the pattern they wanted. With the hydro acoustic research and information input of Shaun Ash, also a highly respected fly tier and some better insight into the habits of Barramundi from Rod Harrison a well known Barramundi expert, the focus of the flies characteristic requirements were tuned, researched in tanks swimming pools, rivers , ponds ,reservoirs, lakes, estuaries and even the open sea with and without hydrophones and the flies properties were eventually developed and refined to create the Bush Pig pattern blue print.

hatever the size or material the pattern is tied with, and tied properly, the fly will include the properties of a 360 degree fish profile.

he Bush Pig is not the ideal fly to cast, not the easiest pattern to proportion properly and tie well, but it is among the most effective flies to initiate a confident strike from a predator and is proven in both fresh and salt waters, clear and coloured, from around the globe.

Neon Sail A lit up sailfish wacks at a bait ball of sardines off Isla Mujeres in Mexico.

Silver Spear The body of an Atlantic sailfish flashes silver just as it attacks the bait ball of sardines confusing them.

Attack Attacking tarpon punch holes in sheets of silversides inside a cave on the South side of Grand Cayman in the Cayman Islands.

Strike From Below The bill of a striped marlin scatters sardines in a bait ball in an attempt to grab one in itâ&#x20AC;&#x2122;s jaw. Golden Gate Banks, Baja , Mexico.

ALUMINIUM PRINTS Not satisfied with printing his photographs on canvas using traditional ink jet methods, Marc had recently begun using a brand new printing technology that uses a dye sublimation process to print photographs directly onto aluminum. The result was stunning—as crisp and vivid as high definition television—bringing the viewer as close as possible to the fish and turning his already amazing photographs into exquisite artwork—authentic, breathtaking pictures transformed into a high end, luxury product.

One Second The motor drive sequence of a blue marlin striking the teaser off the North Drop of St Thomas, Virgin Islands. The 5 frames were shot in just under one second.

Crash A striped marlin crashes the bait ball from below against a burst of sunlight. Golden Gate banks, Baja Mexico.

One of the most innovative and talented underwater photographers working today, Marc Montocchio specializes in capturing unique and stunning images of ocean wildlife in their natural habitat. His work has appeared in numerous international publications, including National Geographic, Marlin, Outside Traveler, Africa Geographic, BlueWater, Tide, Out There, Voyages de Pêche, and many more. Visit Marc´s website:

A nice dorado with a red/black fly.

Fighting a dorado. The river looks like a mountain creek with small trout, the reality is that dorado inhabit these forest waters and sight fishing is very exciting

The river in the middle of lush forest of Yunga.

Dorado is the king of fish in these rivers sharing habitat with sรกbalo, boga, catfish and some smaller prey fish.

The clear water requires an angler to have excellent presentations and a stealthy approach.

4x4 cars are ideal to travel the paths of this 80.000 acres Estancia, where are the headwaters of Dorado and Valley rivers. Only about 60 fishermen a year come to these rivers, one of the wildest and less pressured environments for dorado.

The upper reaches of these rivers are only accessible by horseback (the original all terrain vehicle).

A strong jaw and razor-sharp teeth. Wire leader or shock tippet are essential to fish dorado.

Camp by the riverbank and argentinean typical asado for dinner. Fishing the rivers of the Yunga forest is an adventure.

It is not uncommon to witness 20-25 Dorado in a single pool. Because of the abundant food supple the average Dorado weighs 5-6 kilos (11-14 pounds) with fish exceeding 15 kilo in the river.

A good selection of flies.

The season on these three rivers is April and May and then September, October and November. Early June can be good also but is weather dependent. From December to late March the rivers are inaccessible due to the rainy season.

Same fisherman with three different fish, during the stay in these rivers is possible catch many great dorado, with the incentive to fish in a clear water small river sight fishing.

Agustín García Bastons is one of the best fly fishing photographers able to portray the dorado in all its splendor. These photographs of details of the head and scales of the fish or some dorado swimming in a pool, are part of its large archive. To contact AgustÍn: agb29@hotmail.com

If you plan to go to Dorado and Valle rivers, contact with Andes Drifters - www.andesdrifters.com 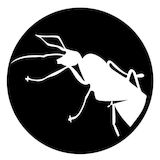