Lost in a Book 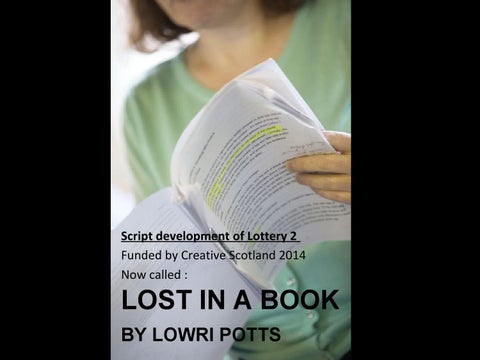 LOST IN A BOOK BY LOWRI POTTS

Alicia plays the part of Jane, a librarian.

Euan plays the part of ‘Character’

Some observers are welcome in the wings

Only a handful of props neededâ&amp;#x20AC;Ś. and we are ready to start!

“Does the name ‘D’Artagnan mean anything to you?”

“A crisis is a crisis. I’ve got one now. An identity crisis. So fight!”

Adjustments needed for a new space?

“I’m a hero in waiting. Waiting to star in my story. Aren’t you? Aren’t we all?”

The poster is distributed

Script-in-hand performance at Pollokshaws Library on 20.3.14

Our second Script-in-hand performance in the Library @ The Bridge, Easterhouse 20.3.14…….

Q and A with writer, director and audience after each show.

Some audience feedback “Really portrayed the library as so much more than books!” “I liked the librarian – particularly the hints at the complexity of her background and her personality, the interplay between the two characters, the sense of play, fun and discovery in a library setting. “I like that it’s accessible as a story – lots of different aspects for people to engage with, the language is open and appealing.”

“The play has great potential for a community and book festival audience too” “I think it would be appealing to a wide audience, just as a library is”

Lost in a Book

A surprising play for a library