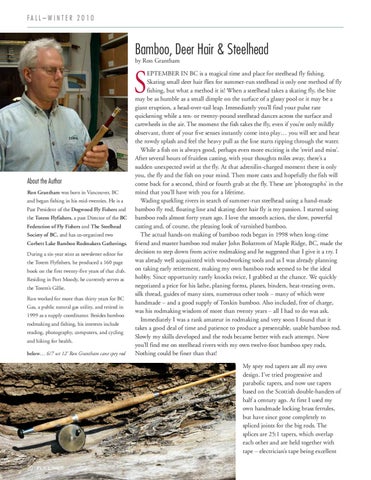 S About the Author Ron Grantham was born in Vancouver, BC and began fishing in his mid-twenties. He is a Past President of the Dogwood Fly Fishers and the Totem Flyfishers, a past Director of the BC Federation of Fly Fishers and The Steelhead Society of BC, and has co-organized two Corbett Lake Bamboo Rodmakers Gatherings. During a six-year stint as newsletter editor for the Totem Flyfishers, he produced a 160 page book on the first twenty-five years of that club. Residing in Port Moody, he currently serves as the Totem’s Gillie. Ron worked for more than thirty years for BC Gas, a public natural gas utility, and retired in 1999 as a supply coordinator. Besides bamboo rodmaking and fishing, his interests include reading, photography, computers, and cycling and hiking for health. below… 6/7 wt 12&#39; Ron Grantham cane spey rod

EPTEMBER IN BC is a magical time and place for steelhead fly fishing. Skating small deer hair flies for summer-run steelhead is only one method of fly fishing, but what a method it is! When a steelhead takes a skating fly, the bite may be as humble as a small dimple on the surface of a glassy pool or it may be a giant eruption, a head-over-tail leap. Immediately you’ll find your pulse rate quickening while a ten- or twenty-pound steelhead dances across the surface and cartwheels in the air. The moment the fish takes the fly, even if you’re only mildly observant, three of your five senses instantly come into play… you will see and hear the rowdy splash and feel the heavy pull as the line starts ripping through the water. While a fish on is always good, perhaps even more exciting is the ‘swirl and miss’. After several hours of fruitless casting, with your thoughts miles away, there’s a sudden unexpected swirl at the fly. At that adrenilin-charged moment there is only you, the fly and the fish on your mind. Then more casts and hopefully the fish will come back for a second, third or fourth grab at the fly. These are ‘photographs’ in the mind that you’ll have with you for a lifetime. Wading sparkling rivers in search of summer-run steelhead using a hand-made bamboo fly rod, floating line and skating deer hair fly is my passion. I started using bamboo rods almost forty years ago. I love the smooth action, the slow, powerful casting and, of course, the pleasing look of varnished bamboo. The actual hands-on making of bamboo rods began in 1998 when long-time friend and master bamboo rod maker John Bokstrom of Maple Ridge, BC, made the decision to step down from active rodmaking and he suggested that I give it a try. I was already well acquainted with woodworking tools and as I was already planning on taking early retirement, making my own bamboo rods seemed to be the ideal hobby. Since opportunity rarely knocks twice, I grabbed at the chance. We quickly negotiated a price for his lathe, planing forms, planes, binders, heat-treating oven, silk thread, guides of many sizes, numerous other tools – many of which were handmade – and a good supply of Tonkin bamboo. Also included, free of charge, was his rodmaking wisdom of more than twenty years – all I had to do was ask. Immediately I was a rank amateur in rodmaking and very soon I found that it takes a good deal of time and patience to produce a presentable, usable bamboo rod. Slowly my skills developed and the rods became better with each attempt. Now you’ll find me on steelhead rivers with my own twelve-foot bamboo spey rods. Nothing could be finer than that! My spey rod tapers are all my own design. I’ve tried progressive and parabolic tapers, and now use tapers based on the Scottish double-handers of half a century ago. At first I used my own handmade locking brass ferrules, but have since gone completely to spliced joints for the big rods. The splices are 25:1 tapers, which overlap each other and are held together with tape – electrician’s tape being excellent

Fly Lines | Official eJournal of the BC Federation of Fly Fishers 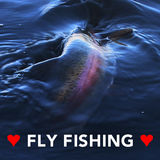