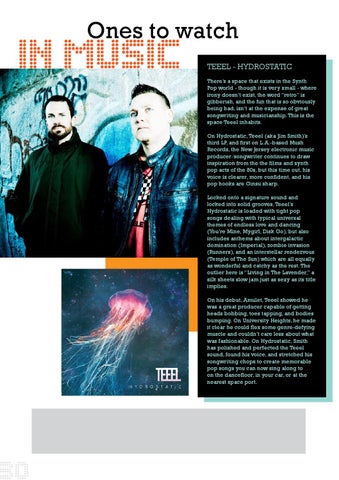 Ones to watch Teeel - HyDROSTATIC There’s a space that exists in the Synth Pop world - though it is very small - where irony doesn’t exist, the word “retro” is gibberish, and the fun that is so obviously being had, isn’t at the expense of great songwriting and musicianship. This is the space Teeel inhabits. On Hydrostatic, Teeel (aka Jim Smith)’s third LP, and first on L.A.-based Mush Records, the New Jersey electronic music producer/songwriter continues to draw inspiration from the the films and synth pop acts of the 80s, but this time out, his voice is clearer, more confident, and his pop hooks are Ginsu sharp. Locked onto a signature sound and locked into solid grooves, Teeel’s Hydrostatic is loaded with tight pop songs dealing with typical universal themes of endless love and dancing (You’re Mine, Mygirl, Disk Go), but also includes anthems about intergalactic domination (Imperial), zombie invasion (Runners), and an interstellar rendezvous (Temple of The Sun) which are all equally as wonderful and catchy as the rest. The outlier here is “Living in The Lavender,” a silk sheets slow jam just as sexy as its title implies. On his debut, Amulet, Teeel showed he was a great producer capable of getting heads bobbing, toes tapping, and bodies bumping. On University Heights, he made it clear he could flex some genre-defying muscle and couldn’t care less about what was fashionable. On Hydrostatic, Smith has polished and perfected the Teeel sound, found his voice, and stretched his songwriting chops to create memorable pop songs you can now sing along to on the dancefloor, in your car, or at the nearest space port. 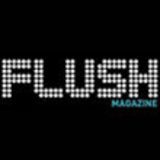