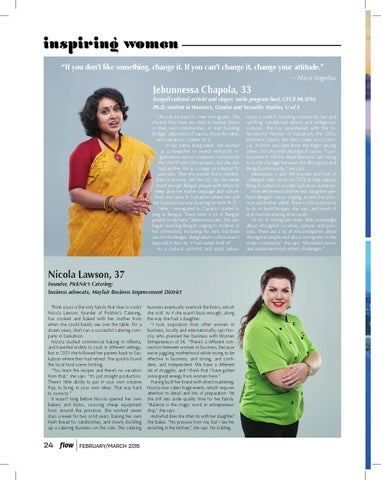 inspiring women “If you TK TK TKdon’t TKlike something, change it. If you can’t change it, change your attitude.”

Bengali cultural activist and singer; radio program host, CFCR 90.5FM; Ph.D. student in Women’s, Gender and Sexuality Studies, U of S Life can be hard for new immigrants. The choices they face are often to hunker down in their own communities, or start building bridges. Jebunnessa Chapola chose the latter, and Saskatoon is better for it. In her native Bangladesh, she worked as a researcher in several non-profit organisations and as a national consultant to the UNDP and CIDA projects, but she also had another life as a singer on national TV and radio. Then she moved: first to Sweden, then to Norway and the US, but she never found enough Bengali people with whom to keep alive her native language and culture. Then she came to Saskatoon where she and her husband are now studying for their Ph.D. “After I immigrated to Canada I started to sing in Bengali. There were a lot of Bengali people living here,” Jebunnessa says. She also began teaching Bengali singing to children in her community, including her own, but there are still challenges: Bangladeshi culture wasn’t exposed to the city; it had sealed itself off. As a cultural activitist and artist, Jebun-

Founder, PickNic’s Catering; business advocate, Mayfair Business Improvement District Think yours is the only family that likes to cook? Nicola Lawson, founder of PickNic’s Catering, has cooked and baked with her mother from when she could barely see over the table. For a dozen years, she’s run a successful catering company in Saskatoon. Nicola studied commercial baking in Alberta, and travelled widely to cook in different settings, but in 2001 she followed her parents back to Saskatoon where they had retired. She quickly found the local food scene limiting. “You learn the recipes and there’s no variation from that,” she says. “It’s just straight production. There’s little ability to put in your own creative flair, to bring in your own ideas. That was hard to come to.” It wasn’t long before Nicola opened her own bakery and bistro, sourcing cheap equipment from around the province. She worked seven days a week for two solid years, baking her own fresh bread for sandwiches, and slowly building up a catering business on the side. The catering

business eventually overtook the bistro, which she sold. As if she wasn’t busy enough, along the way she had a daughter. “I took inspiration from other women in business, locally and internationally, says Nicola, who planned her business with Women Entrepreneurs of SK. “There’s a different connection between women in business, because we’re juggling motherhood while trying to be effective in business, and strong, and confident, and independent. We have a different set of struggles, and I think that I have gotten some great energy from women here.” Having built her brand with direct marketing, Nicola now caters huge events, which requires attention to detail and lots of preparation. Yet she still sets aside quality time for her family. “Balance is the magic word in entrepreneurship,” she says. And what does she often do with her daughter? She bakes. “No pressure from me, but I see her excelling in the kitchen,” she says. No kidding.

nessa is used to building community ties and uplifting subalterned ethnic and indigenous cultures. She has volunteered with the International Women of Saskatoon, the USSU Women’s Centre, the Ness Creek music festival, Folkfest and Take Back the Night among others, but also with Aboriginal causes. “I participated in Idle No More because I am trying to build a bridge between the Aboriginal and Bengali community,” she says. Jebunnessa is also the founder and host of a Bengali radio show on CFCR to help expose Bengali culture to a wider Saskatoon audience. Now Jebunnessa and her two daughters perform Bengali classic singing around the province and further afield. There is still much work to do to build bridges, she says, and much of that involves tearing down walls. “A lot of immigrants have little knowledge about Aboriginal societies, cultures and practices. There are a lot of misconceptions about Aboriginal people and about immigrants in the wider community,” she says. “We need to know and understand each other’s challenges.” 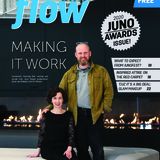 Celebrating the Inspiring Women of YXE

Celebrating the Inspiring Women of YXE