Wellington The Magazine May 2019 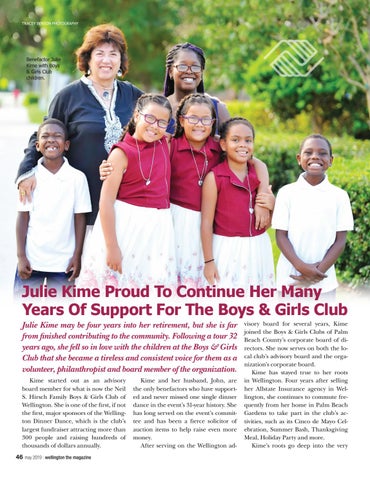 Julie Kime Proud To Continue Her Many Years Of Support For The Boys &amp; Girls Club Julie Kime may be four years into her retirement, but she is far from finished contributing to the community. Following a tour 32 years ago, she fell so in love with the children at the Boys &amp; Girls Club that she became a tireless and consistent voice for them as a volunteer, philanthropist and board member of the organization. Kime started out as an advisory board member for what is now the Neil S. Hirsch Family Boys &amp; Girls Club of Wellington. She is one of the first, if not the first, major sponsors of the Wellington Dinner Dance, which is the club’s largest fundraiser attracting more than 300 people and raising hundreds of thousands of dollars annually. 46

may 2019 | wellington the magazine

Kime and her husband, John, are the only benefactors who have supported and never missed one single dinner dance in the event’s 31-year history. She has long served on the event’s committee and has been a fierce solicitor of auction items to help raise even more money. After serving on the Wellington ad-

visory board for several years, Kime joined the Boys &amp; Girls Clubs of Palm Beach County’s corporate board of directors. She now serves on both the local club’s advisory board and the organization’s corporate board. Kime has stayed true to her roots in Wellington. Four years after selling her Allstate Insurance agency in Wellington, she continues to commute frequently from her home in Palm Beach Gardens to take part in the club’s activities, such as its Cinco de Mayo Celebration, Summer Bash, Thanksgiving Meal, Holiday Party and more. Kime’s roots go deep into the very

Wellington The Magazine May 2019