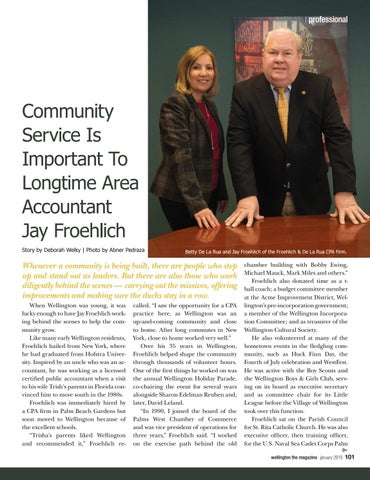 Whenever a community is being built, there are people who step up and stand out as leaders. But there are also those who work diligently behind the scenes — carrying out the missives, offering improvements and making sure the ducks stay in a row. When Wellington was young, it was lucky enough to have Jay Froehlich working behind the scenes to help the community grow. Like many early Wellington residents, Froehlich hailed from New York, where he had graduated from Hofstra University. Inspired by an uncle who was an accountant, he was working as a licensed certified public accountant when a visit to his wife Trish’s parents in Florida convinced him to move south in the 1980s. Froehlich was immediately hired by a CPA firm in Palm Beach Gardens but soon moved to Wellington because of the excellent schools. “Trisha’s parents liked Wellington and recommended it,” Froehlich re-

called. “I saw the opportunity for a CPA practice here, as Wellington was an up-and-coming community and close to home. After long commutes in New York, close to home worked very well.” Over his 35 years in Wellington, Froehlich helped shape the community through thousands of volunteer hours. One of the first things he worked on was the annual Wellington Holiday Parade, co-chairing the event for several years alongside Sharon Edelman Reuben and, later, David Leland. “In 1990, I joined the board of the Palms West Chamber of Commerce and was vice president of operations for three years,” Froehlich said. “I worked on the exercise path behind the old

chamber building with Bobby Ewing, Michael Mauck, Mark Miles and others.” Froehlich also donated time as a tball coach; a budget committee member at the Acme Improvement District, Wellington’s pre-incorporation government; a member of the Wellington Incorporation Committee; and as treasurer of the Wellington Cultural Society. He also volunteered at many of the hometown events in the fledgling community, such as Huck Finn Day, the Fourth of July celebration and WestFest. He was active with the Boy Scouts and the Wellington Boys & Girls Club, serving on its board as executive secretary and as committee chair for its Little League before the Village of Wellington took over this function. Froehlich sat on the Parish Council for St. Rita Catholic Church. He was also executive officer, then training officer, for the U.S. Naval Sea Cadet Corps Palm wellington the magazine | january 2019

January 2019 | ON THE COVER Polo great Mariano Aguerre, profiled this month, has been a force to be reckoned with on the field for three dec...

January 2019 | ON THE COVER Polo great Mariano Aguerre, profiled this month, has been a force to be reckoned with on the field for three dec...