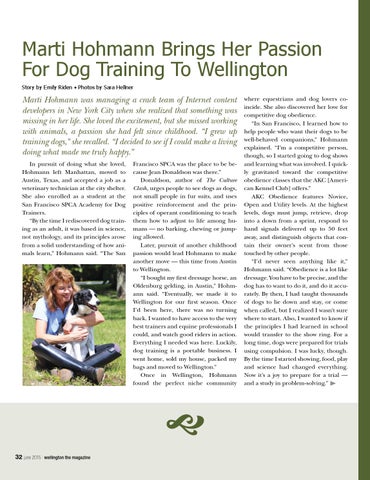 Marti Hohmann was managing a crack team of Internet content developers in New York City when she realized that something was missing in her life. She loved the excitement, but she missed working with animals, a passion she had felt since childhood. “I grew up training dogs,” she recalled. “I decided to see if I could make a living doing what made me truly happy.” In pursuit of doing what she loved, Hohmann left Manhattan, moved to Austin, Texas, and accepted a job as a veterinary technician at the city shelter. She also enrolled as a student at the San Francisco SPCA Academy for Dog Trainers. “By the time I rediscovered dog training as an adult, it was based in science, not mythology, and its principles arose from a solid understanding of how animals learn,” Hohmann said. “The San

Francisco SPCA was the place to be because Jean Donaldson was there.” Donaldson, author of The Culture Clash, urges people to see dogs as dogs, not small people in fur suits, and uses positive reinforcement and the principles of operant conditioning to teach them how to adjust to life among humans — no barking, chewing or jumping allowed. Later, pursuit of another childhood passion would lead Hohmann to make another move — this time from Austin to Wellington. “I bought my first dressage horse, an Oldenburg gelding, in Austin,” Hohmann said. “Eventually, we made it to Wellington for our first season. Once I’d been here, there was no turning back. I wanted to have access to the very best trainers and equine professionals I could, and watch good riders in action. Everything I needed was here. Luckily, dog training is a portable business. I went home, sold my house, packed my bags and moved to Wellington.” Once in Wellington, Hohmann found the perfect niche community

where equestrians and dog lovers coincide. She also discovered her love for competitive dog obedience. “In San Francisco, I learned how to help people who want their dogs to be well-behaved companions,” Hohmann explained. “I’m a competitive person, though, so I started going to dog shows and learning what was involved. I quickly gravitated toward the competitive obedience classes that the AKC [American Kennel Club] offers.” AKC Obedience features Novice, Open and Utility levels. At the highest levels, dogs must jump, retrieve, drop into a down from a sprint, respond to hand signals delivered up to 50 feet away, and distinguish objects that contain their owner’s scent from those touched by other people. “I’d never seen anything like it,” Hohmann said. “Obedience is a lot like dressage. You have to be precise, and the dog has to want to do it, and do it accurately. By then, I had taught thousands of dogs to lie down and stay, or come when called, but I realized I wasn’t sure where to start. Also, I wanted to know if the principles I had learned in school would transfer to the show ring. For a long time, dogs were prepared for trials using compulsion. I was lucky, though. By the time I started showing, food, play and science had changed everything. Now it’s a joy to prepare for a trial — and a study in problem-solving.”

June 2015 | ON THE COVER Learn more about Tory, our cover dog, in the Forever Greyhounds feature. Photo by Abner Pedraza | Riding Is A Way...

June 2015 | ON THE COVER Learn more about Tory, our cover dog, in the Forever Greyhounds feature. Photo by Abner Pedraza | Riding Is A Way...