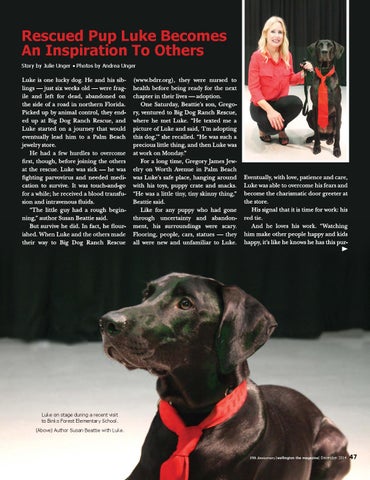 Luke is one lucky dog. He and his siblings — just six weeks old — were fragile and left for dead, abandoned on the side of a road in northern Florida. Picked up by animal control, they ended up at Big Dog Ranch Rescue, and Luke started on a journey that would eventually lead him to a Palm Beach jewelry store. He had a few hurdles to overcome first, though, before joining the others at the rescue. Luke was sick — he was fighting parvovirus and needed medication to survive. It was touch-and-go for a while; he received a blood transfusion and intravenous fluids. “The little guy had a rough beginning,” author Susan Beattie said. But survive he did. In fact, he flourished. When Luke and the others made their way to Big Dog Ranch Rescue

(www.bdrr.org), they were nursed to health before being ready for the next chapter in their lives — adoption. One Saturday, Beattie’s son, Gregory, ventured to Big Dog Ranch Rescue, where he met Luke. “He texted me a picture of Luke and said, ‘I’m adopting this dog,’” she recalled. “He was such a precious little thing, and then Luke was at work on Monday.” For a long time, Gregory James Jewelry on Worth Avenue in Palm Beach was Luke’s safe place, hanging around with his toys, puppy crate and snacks. “He was a little tiny, tiny skinny thing,” Beattie said. Like for any puppy who had gone through uncertainty and abandonment, his surroundings were scary. Flooring, people, cars, statues — they all were new and unfamiliar to Luke.

Eventually, with love, patience and care, Luke was able to overcome his fears and become the charismatic door greeter at the store. His signal that it is time for work: his red tie. And he loves his work. “Watching him make other people happy and kids happy, it’s like he knows he has this pur-

Luke on stage during a recent visit to Binks Forest Elementary School. (Above) Author Susan Beattie with Luke.