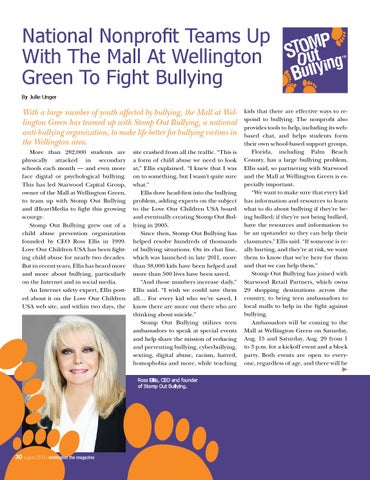 With a large number of youth affected by bullying, the Mall at Wellington Green has teamed up with Stomp Out Bullying, a national anti-bullying organization, to make life better for bullying victims in the Wellington area. More than 282,000 students are physically attacked in secondary schools each month — and even more face digital or psychological bullying. This has led Starwood Capital Group, owner of the Mall at Wellington Green, to team up with Stomp Out Bullying and iHeartMedia to fight this growing scourge. Stomp Out Bullying grew out of a child abuse prevention organization founded by CEO Ross Ellis in 1999. Love Our Children USA has been fighting child abuse for nearly two decades. But in recent years, Ellis has heard more and more about bullying, particularly on the Internet and in social media. An Internet safety expert, Ellis posted about it on the Love Our Children USA web site, and within two days, the

site crashed from all the traffic. “This is a form of child abuse we need to look at,” Ellis explained. “I knew that I was on to something, but I wasn’t quite sure what.” Ellis dove head-first into the bullying problem, adding experts on the subject to the Love Our Children USA board and eventually creating Stomp Out Bullying in 2005. Since then, Stomp Out Bullying has helped resolve hundreds of thousands of bullying situations. On its chat line, which was launched in late 2011, more than 38,000 kids have been helped and more than 500 lives have been saved. “And those numbers increase daily,” Ellis said. “I wish we could save them all… For every kid who we’ve saved, I know there are more out there who are thinking about suicide.” Stomp Out Bullying utilizes teen ambassadors to speak at special events and help share the mission of reducing and preventing bullying, cyberbullying, sexting, digital abuse, racism, hatred, homophobia and more, while teaching Ross Ellis, CEO and founder of Stomp Out Bullying.

kids that there are effective ways to respond to bullying. The nonprofit also provides tools to help, including its webbased chat, and helps students form their own school-based support groups. Florida, including Palm Beach County, has a large bullying problem, Ellis said, so partnering with Starwood and the Mall at Wellington Green is especially important. “We want to make sure that every kid has information and resources to learn what to do about bullying if they’re being bullied; if they’re not being bullied, have the resources and information to be an upstander so they can help their classmates,” Ellis said. “If someone is really hurting, and they’re at risk, we want them to know that we’re here for them and that we can help them.” Stomp Out Bullying has joined with Starwood Retail Partners, which owns 29 shopping destinations across the country, to bring teen ambassadors to local malls to help in the fight against bullying. Ambassadors will be coming to the Mall at Wellington Green on Saturday, Aug. 15 and Saturday, Aug. 29 from 1 to 3 p.m. for a kickoff event and a block party. Both events are open to everyone, regardless of age, and there will be