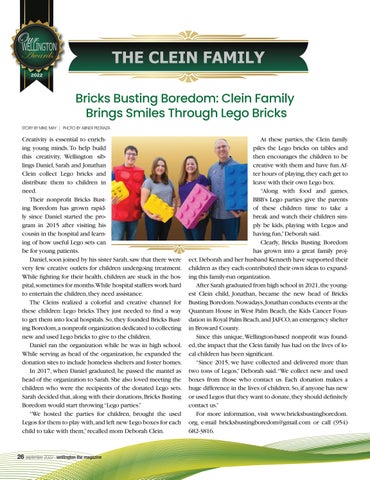 Creativity is essential to enriching young minds. To help build this creativity, Wellington siblings Daniel, Sarah and Jonathan Clein collect Lego bricks and distribute them to children in need. Their nonprofit Bricks Busting Boredom has grown rapidly since Daniel started the program in 2015 after visiting his cousin in the hospital and learning of how useful Lego sets can be for young patients. Daniel, soon joined by his sister Sarah, saw that there were very few creative outlets for children undergoing treatment. While fighting for their health, children are stuck in the hospital, sometimes for months.While hospital staffers work hard to entertain the children, they need assistance. The Cleins realized a colorful and creative channel for these children: Lego bricks. They just needed to find a way to get them into local hospitals. So, they founded Bricks Busting Boredom, a nonprofit organization dedicated to collecting new and used Lego bricks to give to the children. Daniel ran the organization while he was in high school. While serving as head of the organization, he expanded the donation sites to include homeless shelters and foster homes. In 2017, when Daniel graduated, he passed the mantel as head of the organization to Sarah. She also loved meeting the children who were the recipients of the donated Lego sets. Sarah decided that, along with their donations, Bricks Busting Boredom would start throwing “Lego parties.” “We hosted the parties for children, brought the used Legos for them to play with, and left new Lego boxes for each child to take with them,” recalled mom Deborah Clein.

At these parties, the Clein family piles the Lego bricks on tables and then encourages the children to be creative with them and have fun. After hours of playing, they each get to leave with their own Lego box. “Along with food and games, BBB’s Lego parties give the parents of these children time to take a break and watch their children simply be kids, playing with Legos and having fun,” Deborah said. Clearly, Bricks Busting Boredom has grown into a great family project. Deborah and her husband Kenneth have supported their children as they each contributed their own ideas to expanding this family-run organization. After Sarah graduated from high school in 2021, the youngest Clein child, Jonathan, became the new head of Bricks Busting Boredom. Nowadays, Jonathan conducts events at the Quantum House in West Palm Beach, the Kids Cancer Foundation in Royal Palm Beach, and JAFCO, an emergency shelter in Broward County. Since this unique, Wellington-based nonprofit was founded, the impact that the Clein family has had on the lives of local children has been significant. “Since 2015, we have collected and delivered more than two tons of Legos,” Deborah said. “We collect new and used boxes from those who contact us. Each donation makes a huge difference in the lives of children. So, if anyone has new or used Legos that they want to donate, they should definitely contact us.” For more information, visit www.bricksbustingboredom. org, e-mail bricksbustingboredom@gmail.com or call (954) 682-3816.