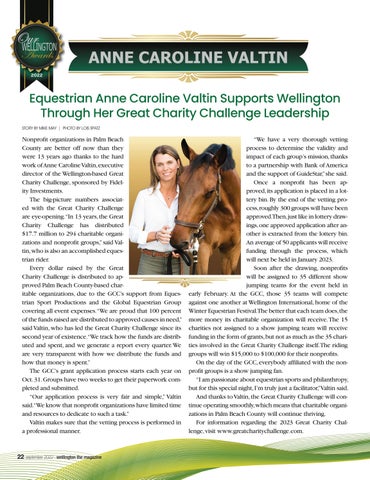 “We have a very thorough vetting process to determine the validity and impact of each group’s mission, thanks to a partnership with Bank of America and the support of GuideStar,” she said. Once a nonprofit has been approved, its application is placed in a lottery bin. By the end of the vetting process, roughly 300 groups will have been approved.Then, just like in lottery drawings, one approved application after another is extracted from the lottery bin. An average of 50 applicants will receive funding through the process, which will next be held in January 2023. Soon after the drawing, nonprofits will be assigned to 35 different show jumping teams for the event held in early February. At the GCC, those 35 teams will compete against one another at Wellington International, home of the Winter Equestrian Festival.The better that each team does, the more money its charitable organization will receive. The 15 charities not assigned to a show jumping team will receive funding in the form of grants, but not as much as the 35 charities involved in the Great Charity Challenge itself. The riding groups will win $15,000 to $100,000 for their nonprofits. On the day of the GCC, everybody affiliated with the nonprofit groups is a show jumping fan. “I am passionate about equestrian sports and philanthropy, but for this special night, I’m truly just a facilitator,”Valtin said. And thanks to Valtin, the Great Charity Challenge will continue operating smoothly, which means that charitable organizations in Palm Beach County will continue thriving. For information regarding the 2023 Great Charity Challenge, visit www.greatcharitychallenge.com.