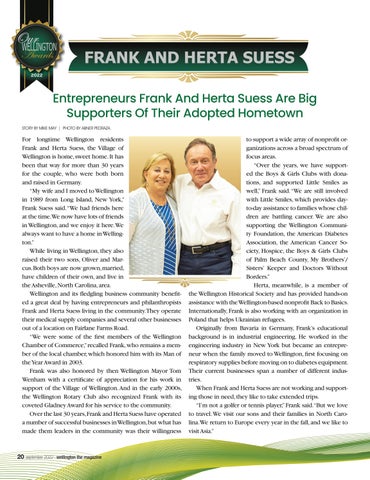 For longtime Wellington residents Frank and Herta Suess, the Village of Wellington is home, sweet home. It has been that way for more than 30 years for the couple, who were both born and raised in Germany. “My wife and I moved to Wellington in 1989 from Long Island, New York,” Frank Suess said. “We had friends here at the time.We now have lots of friends in Wellington, and we enjoy it here.We always want to have a home in Wellington.” While living in Wellington, they also raised their two sons, Oliver and Marcus. Both boys are now grown, married, have children of their own, and live in the Asheville, North Carolina, area. Wellington and its fledgling business community benefited a great deal by having entrepreneurs and philanthropists Frank and Herta Suess living in the community.They operate their medical supply companies and several other businesses out of a location on Fairlane Farms Road. “We were some of the first members of the Wellington Chamber of Commerce,” recalled Frank, who remains a member of the local chamber, which honored him with its Man of the Year Award in 2003. Frank was also honored by then Wellington Mayor Tom Wenham with a certificate of appreciation for his work in support of the Village of Wellington. And in the early 2000s, the Wellington Rotary Club also recognized Frank with its coveted Gladney Award for his service to the community. Over the last 30 years, Frank and Herta Suess have operated a number of successful businesses in Wellington, but what has made them leaders in the community was their willingness

to support a wide array of nonprofit organizations across a broad spectrum of focus areas. “Over the years, we have supported the Boys &amp; Girls Clubs with donations, and supported Little Smiles as well,” Frank said. “We are still involved with Little Smiles, which provides dayto-day assistance to families whose children are battling cancer. We are also supporting the Wellington Community Foundation, the American Diabetes Association, the American Cancer Society, Hospice, the Boys &amp; Girls Clubs of Palm Beach County, My Brothers’/ Sisters’ Keeper and Doctors Without Borders.” Herta, meanwhile, is a member of the Wellington Historical Society and has provided hands-on assistance with the Wellington-based nonprofit Back to Basics. Internationally, Frank is also working with an organization in Poland that helps Ukrainian refugees. Originally from Bavaria in Germany, Frank’s educational background is in industrial engineering. He worked in the engineering industry in New York but became an entrepreneur when the family moved to Wellington, first focusing on respiratory supplies before moving on to diabetes equipment. Their current businesses span a number of different industries. When Frank and Herta Suess are not working and supporting those in need, they like to take extended trips. “I’m not a golfer or tennis player,” Frank said.“But we love to travel. We visit our sons and their families in North Carolina.We return to Europe every year in the fall, and we like to visit Asia.”