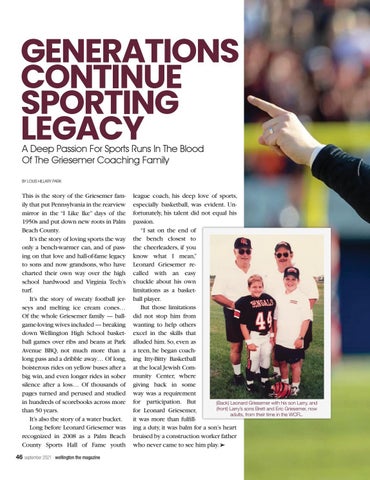 This is the story of the Griesemer family that put Pennsylvania in the rearview mirror in the “I Like Ike” days of the 1950s and put down new roots in Palm Beach County. It’s the story of loving sports the way only a bench-warmer can, and of passing on that love and hall-of-fame legacy to sons and now grandsons, who have charted their own way over the high school hardwood and Virginia Tech’s turf. It’s the story of sweaty football jerseys and melting ice cream cones… Of the whole Griesemer family — ballgame-loving wives included — breaking down Wellington High School basketball games over ribs and beans at Park Avenue BBQ, not much more than a long pass and a dribble away… Of long, boisterous rides on yellow buses after a big win, and even longer rides in sober silence after a loss… Of thousands of pages turned and perused and studied in hundreds of scorebooks across more than 50 years. It’s also the story of a water bucket. Long before Leonard Griesemer was recognized in 2008 as a Palm Beach County Sports Hall of Fame youth 46

league coach, his deep love of sports, especially basketball, was evident. Unfortunately, his talent did not equal his passion. “I sat on the end of the bench closest to the cheerleaders, if you know what I mean,” Leonard Griesemer recalled with an easy chuckle about his own limitations as a basketball player. But those limitations did not stop him from wanting to help others excel in the skills that alluded him. So, even as a teen, he began coaching Itty-Bitty Basketball at the local Jewish Community Center, where giving back in some way was a requirement for participation. But (Back) Leonard Griesemer with his son Larry, and (front) Larry’s sons Brett and Eric Griesemer, now for Leonard Griesemer, adults, from their time in the WCFL. it was more than fulfilling a duty, it was balm for a son’s heart bruised by a construction worker father who never came to see him play.