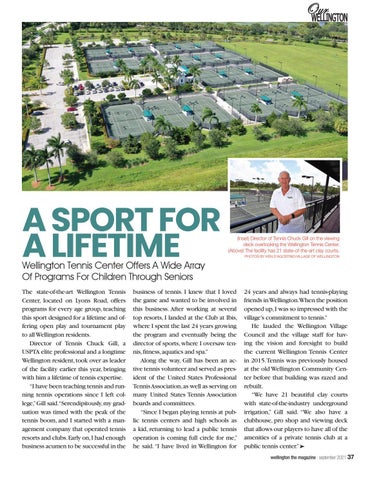 A SPORT FOR A LIFETIME

(Inset) Director of Tennis Chuck Gill on the viewing deck overlooking the Wellington Tennis Center. (Above) The facility has 21 state-of-the-art clay courts. PHOTOS BY KEN D’AGOSTINO/VILLAGE OF WELLINGTON

The state-of-the-art Wellington Tennis Center, located on Lyons Road, offers programs for every age group, teaching this sport designed for a lifetime and offering open play and tournament play to all Wellington residents. Director of Tennis Chuck Gill, a USPTA elite professional and a longtime Wellington resident, took over as leader of the facility earlier this year, bringing with him a lifetime of tennis expertise. “I have been teaching tennis and running tennis operations since I left college,” Gill said.“Serendipitously, my graduation was timed with the peak of the tennis boom, and I started with a management company that operated tennis resorts and clubs. Early on, I had enough business acumen to be successful in the

business of tennis. I knew that I loved the game and wanted to be involved in this business. After working at several top resorts, I landed at the Club at Ibis, where I spent the last 24 years growing the program and eventually being the director of sports, where I oversaw tennis, fitness, aquatics and spa.” Along the way, Gill has been an active tennis volunteer and served as president of the United States Professional Tennis Association, as well as serving on many United States Tennis Association boards and committees. “Since I began playing tennis at public tennis centers and high schools as a kid, returning to lead a public tennis operation is coming full circle for me,” he said. “I have lived in Wellington for

24 years and always had tennis-playing friends in Wellington.When the position opened up, I was so impressed with the village’s commitment to tennis.” He lauded the Wellington Village Council and the village staff for having the vision and foresight to build the current Wellington Tennis Center in 2015. Tennis was previously housed at the old Wellington Community Center before that building was razed and rebuilt. “We have 21 beautiful clay courts with state-of-the-industry underground irrigation,” Gill said. “We also have a clubhouse, pro shop and viewing deck that allows our players to have all of the amenities of a private tennis club at a public tennis center.” wellington the magazine | september 2021 37