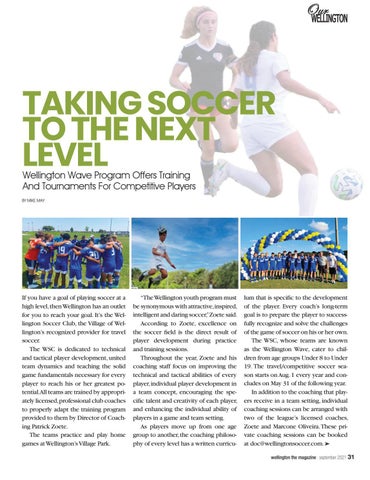 If you have a goal of playing soccer at a high level, then Wellington has an outlet for you to reach your goal. It’s the Wellington Soccer Club, the Village of Wellington’s recognized provider for travel soccer. The WSC is dedicated to technical and tactical player development, united team dynamics and teaching the solid game fundamentals necessary for every player to reach his or her greatest potential.All teams are trained by appropriately licensed, professional club coaches to properly adapt the training program provided to them by Director of Coaching Patrick Zoete. The teams practice and play home games at Wellington’s Village Park.

“The Wellington youth program must be synonymous with attractive, inspired, intelligent and daring soccer,” Zoete said. According to Zoete, excellence on the soccer field is the direct result of player development during practice and training sessions. Throughout the year, Zoete and his coaching staff focus on improving the technical and tactical abilities of every player, individual player development in a team concept, encouraging the specific talent and creativity of each player, and enhancing the individual ability of players in a game and team setting. As players move up from one age group to another, the coaching philosophy of every level has a written curricu-

lum that is specific to the development of the player. Every coach’s long-term goal is to prepare the player to successfully recognize and solve the challenges of the game of soccer on his or her own. The WSC, whose teams are known as the Wellington Wave, cater to children from age groups Under 8 to Under 19. The travel/competitive soccer season starts on Aug. 1 every year and concludes on May 31 of the following year. In addition to the coaching that players receive in a team setting, individual coaching sessions can be arranged with two of the league’s licensed coaches, Zoete and Marcone Oliveira. These private coaching sessions can be booked at doc@wellingtonsoccer.com. wellington the magazine | september 2021 31