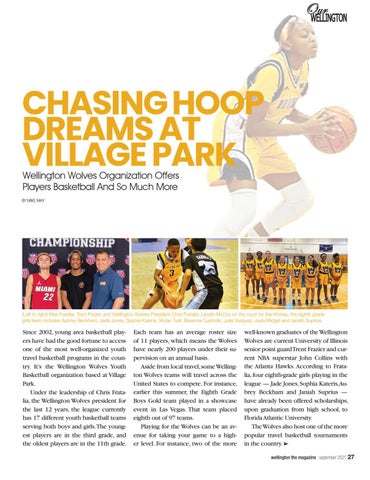 Since 2002, young area basketball players have had the good fortune to access one of the most well-organized youth travel basketball programs in the country. It’s the Wellington Wolves Youth Basketball organization based at Village Park. Under the leadership of Chris Fratalia, the Wellington Wolves president for the last 12 years, the league currently has 17 different youth basketball teams serving both boys and girls. The youngest players are in the third grade, and the oldest players are in the 11th grade.

Each team has an average roster size of 11 players, which means the Wolves have nearly 200 players under their supervision on an annual basis. Aside from local travel, some Wellington Wolves teams will travel across the United States to compete. For instance, earlier this summer, the Eighth Grade Boys Gold team played in a showcase event in Las Vegas. That team placed eighth out of 97 teams. Playing for the Wolves can be an avenue for taking your game to a higher level. For instance, two of the more

well-known graduates of the Wellington Wolves are current University of Illinois senior point guard Trent Frazier and current NBA superstar John Collins with the Atlanta Hawks. According to Fratalia, four eighth-grade girls playing in the league — Jade Jones, Sophia Kateris,Aubrey Beckham and Janiah Suprius — have already been offered scholarships, upon graduation from high school, to Florida Atlantic University. The Wolves also host one of the more popular travel basketball tournaments in the country. wellington the magazine | september 2021 27