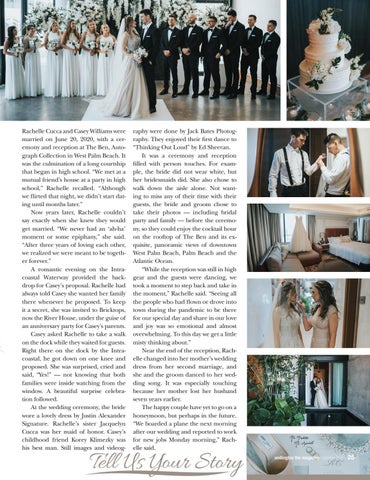 Rachelle Cucca and Casey Williams were married on June 20, 2020, with a ceremony and reception at The Ben, Autograph Collection in West Palm Beach. It was the culmination of a long courtship that began in high school. “We met at a mutual friend’s house at a party in high school,” Rachelle recalled. “Although we flirted that night, we didn’t start dating until months later.” Now years later, Rachelle couldn’t say exactly when she knew they would get married. “We never had an ‘ah-ha’ moment or some epiphany,” she said. “After three years of loving each other, we realized we were meant to be together forever.” A romantic evening on the Intracoastal Waterway provided the backdrop for Casey’s proposal. Rachelle had always told Casey she wanted her family there whenever he proposed. To keep it a secret, she was invited to Bricktops, now the River House, under the guise of an anniversary party for Casey’s parents. Casey asked Rachelle to take a walk on the dock while they waited for guests. Right there on the dock by the Intracoastal, he got down on one knee and proposed. She was surprised, cried and said, “Yes!” — not knowing that both families were inside watching from the window. A beautiful surprise celebration followed. At the wedding ceremony, the bride wore a lovely dress by Justin Alexander Signature. Rachelle’s sister Jacquelyn Cucca was her maid of honor. Casey’s childhood friend Korey Klimezky was his best man. Still images and videog-

raphy were done by Jack Bates Photography. They enjoyed their first dance to “Thinking Out Loud” by Ed Sheeran. It was a ceremony and reception filled with person touches. For example, the bride did not wear white, but her bridesmaids did. She also chose to walk down the aisle alone. Not wanting to miss any of their time with their guests, the bride and groom chose to take their photos — including bridal party and family — before the ceremony, so they could enjoy the cocktail hour on the rooftop of The Ben and its exquisite, panoramic views of downtown West Palm Beach, Palm Beach and the Atlantic Ocean. “While the reception was still in high gear and the guests were dancing, we took a moment to step back and take in the moment,” Rachelle said. “Seeing all the people who had flown or drove into town during the pandemic to be there for our special day and share in our love and joy was so emotional and almost overwhelming. To this day we get a little misty thinking about.” Near the end of the reception, Rachelle changed into her mother’s wedding dress from her second marriage, and she and the groom danced to her wedding song. It was especially touching because her mother lost her husband seven years earlier. The happy couple have yet to go on a honeymoon, but perhaps in the future. “We boarded a plane the next morning after our wedding and reported to work for new jobs Monday morning,” Rachelle said.

Tell Us Your Story