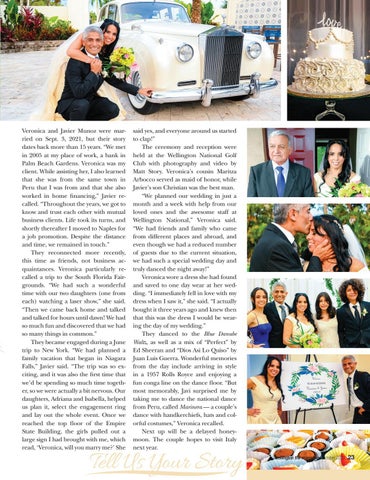 Veronica and Javier Munoz were married on Sept. 3, 2021, but their story dates back more than 15 years. “We met in 2005 at my place of work, a bank in Palm Beach Gardens. Veronica was my client. While assisting her, I also learned that she was from the same town in Peru that I was from and that she also worked in home financing,” Javier recalled. “Throughout the years, we got to know and trust each other with mutual business clients. Life took its turns, and shortly thereafter I moved to Naples for a job promotion. Despite the distance and time, we remained in touch.” They reconnected more recently, this time as friends, not business acquaintances. Veronica particularly recalled a trip to the South Florida Fairgrounds. “We had such a wonderful time with our two daughters (one from each) watching a laser show,” she said. “Then we came back home and talked and talked for hours until dawn! We had so much fun and discovered that we had so many things in common.” They became engaged during a June trip to New York. “We had planned a family vacation that began in Niagara Falls,” Javier said. “The trip was so exciting, and it was also the first time that we’d be spending so much time together, so we were actually a bit nervous. Our daughters, Adriana and Isabella, helped us plan it, select the engagement ring and lay out the whole event. Once we reached the top floor of the Empire State Building, the girls pulled out a large sign I had brought with me, which read, ‘Veronica, will you marry me?’ She

said yes, and everyone around us started to clap!” The ceremony and reception were held at the Wellington National Golf Club with photography and video by Matt Story. Veronica’s cousin Maritza Arbocco served as maid of honor, while Javier’s son Christian was the best man. “We planned our wedding in just a month and a week with help from our loved ones and the awesome staff at Wellington National,” Veronica said. “We had friends and family who came from different places and abroad, and even though we had a reduced number of guests due to the current situation, we had such a special wedding day and truly danced the night away!” Veronica wore a dress she had found and saved to one day wear at her wedding. “I immediately fell in love with my dress when I saw it,” she said. “I actually bought it three years ago and knew then that this was the dress I would be wearing the day of my wedding.” They danced to the Blue Danube Waltz, as well as a mix of “Perfect” by Ed Sheeran and “Dios Asi Lo Quiso” by Juan Luis Guerra. Wonderful memories from the day include arriving in style in a 1957 Rolls Royce and enjoying a fun conga line on the dance floor. “But most memorably, Javi surprised me by taking me to dance the national dance from Peru, called Marinera — a couple’s dance with handkerchiefs, hats and colorful costumes,” Veronica recalled. Next up will be a delayed honeymoon. The couple hopes to visit Italy next year.

Tell Us Your Story