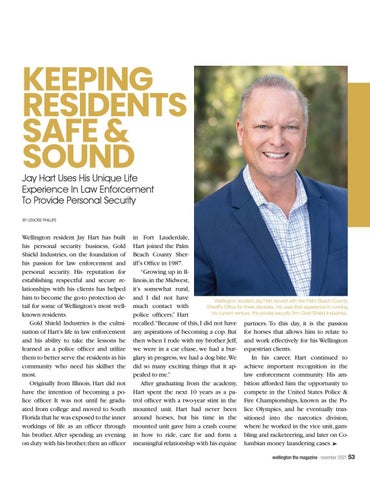 Wellington resident Jay Hart has built his personal security business, Gold Shield Industries, on the foundation of his passion for law enforcement and personal security. His reputation for establishing respectful and secure relationships with his clients has helped him to become the go-to protection detail for some of Wellington’s most wellknown residents. Gold Shield Industries is the culmination of Hart’s life in law enforcement and his ability to take the lessons he learned as a police officer and utilize them to better serve the residents in his community who need his skillset the most. Originally from Illinois, Hart did not have the intention of becoming a police officer. It was not until he graduated from college and moved to South Florida that he was exposed to the inner workings of life as an officer through his brother. After spending an evening on duty with his brother, then an officer

in Fort Lauderdale, Hart joined the Palm Beach County Sheriff’s Office in 1987. “Growing up in Illinois, in the Midwest, it’s somewhat rural, and I did not have Wellington resident Jay Hart served with the Palm Beach County much contact with Sheriff’s Office for three decades. He uses that experience in running his current venture, the private security firm Gold Shield Industries. police officers,” Hart recalled.“Because of this, I did not have partners. To this day, it is the passion any aspirations of becoming a cop. But for horses that allows him to relate to then when I rode with my brother Jeff, and work effectively for his Wellington we were in a car chase, we had a bur- equestrian clients. glary in progress, we had a dog bite.We In his career, Hart continued to did so many exciting things that it ap- achieve important recognition in the pealed to me.” law enforcement community. His amAfter graduating from the academy, bition afforded him the opportunity to Hart spent the next 10 years as a pa- compete in the United States Police &amp; trol officer with a two-year stint in the Fire Championships, known as the Pomounted unit. Hart had never been lice Olympics, and he eventually tranaround horses, but his time in the sitioned into the narcotics division, mounted unit gave him a crash course where he worked in the vice unit, gamin how to ride, care for and form a bling and racketeering, and later on Comeaningful relationship with his equine lumbian money laundering cases. wellington the magazine | november 2021 53