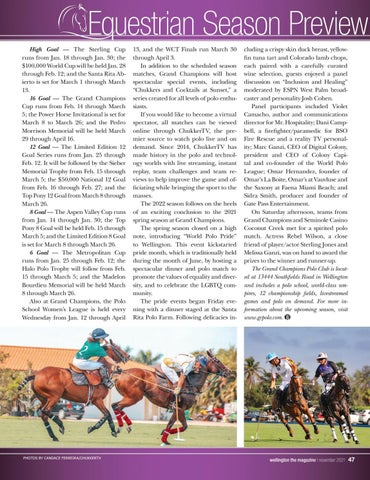 13, and the WCT Finals run March 30 through April 3. In addition to the scheduled season matches, Grand Champions will host spectacular special events, including “Chukkers and Cocktails at Sunset,” a series created for all levels of polo enthusiasts. If you would like to become a virtual spectator, all matches can be viewed online through ChukkerTV, the premier source to watch polo live and on demand. Since 2014, ChukkerTV has made history in the polo and technology worlds with live streaming, instant replay, team challenges and team reviews to help improve the game and officiating while bringing the sport to the masses. The 2022 season follows on the heels of an exciting conclusion to the 2021 spring season at Grand Champions. The spring season closed on a high note, introducing “World Polo Pride” to Wellington. This event kickstarted pride month, which is traditionally held during the month of June, by hosting a spectacular dinner and polo match to promote the values of equality and diversity, and to celebrate the LGBTQ community. The pride events began Friday evening with a dinner staged at the Santa Rita Polo Farm. Following delicacies in-