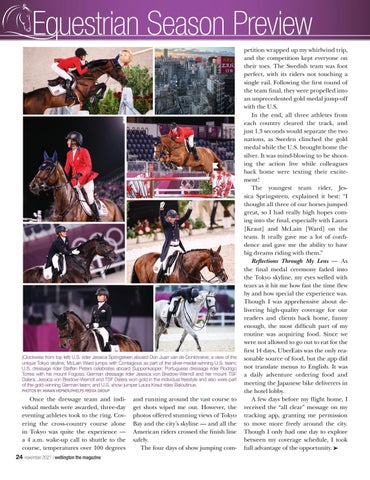 Once the dressage team and individual medals were awarded, three-day eventing athletes took to the ring. Covering the cross-country course alone in Tokyo was quite the experience — a 4 a.m. wake-up call to shuttle to the course, temperatures over 100 degrees 24

and running around the vast course to get shots wiped me out. However, the photos offered stunning views of Tokyo Bay and the city’s skyline — and all the American riders crossed the finish line safely. The four days of show jumping com-

petition wrapped up my whirlwind trip, and the competition kept everyone on their toes. The Swedish team was foot perfect, with its riders not touching a single rail. Following the first round of the team final, they were propelled into an unprecedented gold medal jump-off with the U.S. In the end, all three athletes from each country cleared the track, and just 1.3 seconds would separate the two nations, as Sweden clinched the gold medal while the U.S. brought home the silver. It was mind-blowing to be shooting the action live while colleagues back home were texting their excitement! The youngest team rider, Jessica Springsteen, explained it best: “I thought all three of our horses jumped great, so I had really high hopes coming into the final, especially with Laura [Kraut] and McLain [Ward] on the team. It really gave me a lot of confidence and gave me the ability to have big dreams riding with them.” Reflections Through My Lens — As the final medal ceremony faded into the Tokyo skyline, my eyes welled with tears as it hit me how fast the time flew by and how special the experience was. Though I was apprehensive about delivering high-quality coverage for our readers and clients back home, funny enough, the most difficult part of my routine was acquiring food. Since we were not allowed to go out to eat for the first 14 days, UberEats was the only reasonable source of food, but the app did not translate menus to English. It was a daily adventure ordering food and meeting the Japanese bike deliverers in the hotel lobby. A few days before my flight home, I received the “all clear” message on my tracking app, granting me permission to move more freely around the city. Though I only had one day to explore between my coverage schedule, I took full advantage of the opportunity.