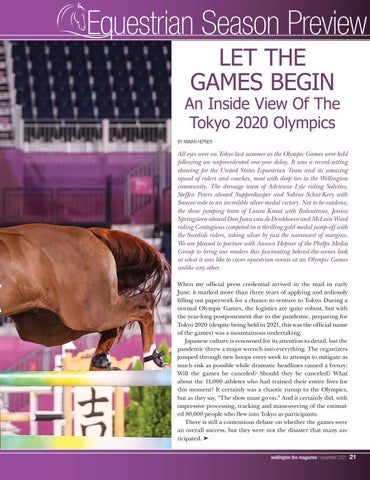 An Inside View Of The Tokyo 2020 Olympics BY ANNAN HEPNER

All eyes were on Tokyo last summer as the Olympic Games were held following an unprecedented one-year delay. It was a record-setting showing for the United States Equestrian Team and its amazing squad of riders and coaches, most with deep ties to the Wellington community. The dressage team of Adrienne Lyle riding Salvino, Steffen Peters aboard Suppenkasper and Sabine Schut-Kery with Sanceo rode to an incredible silver medal victory. Not to be outdone, the show jumping team of Laura Kraut with Baloutinue, Jessica Springsteen aboard Don Juan van de Donkhoeve and McLain Ward riding Contagious competed in a thrilling gold medal jump-off with the Swedish riders, taking silver by just the narrowest of margins. We are pleased to partner with Annan Hepner of the Phelps Media Group to bring our readers this fascinating behind-the-scenes look at what it was like to cover equestrian events at an Olympic Games unlike any other. When my official press credential arrived in the mail in early June, it marked more than three years of applying and tediously filling out paperwork for a chance to venture to Tokyo. During a normal Olympic Games, the logistics are quite robust, but with the year-long postponement due to the pandemic, preparing for Tokyo 2020 (despite being held in 2021, this was the official name of the games) was a mountainous undertaking. Japanese culture is renowned for its attention to detail, but the pandemic threw a major wrench into everything. The organizers jumped through new hoops every week to attempt to mitigate as much risk as possible while dramatic headlines caused a frenzy: Will the games be canceled? Should they be canceled? What about the 11,000 athletes who had trained their entire lives for this moment? It certainly was a chaotic runup to the Olympics, but as they say, “The show must go on.” And it certainly did, with impressive processing, tracking and maneuvering of the estimated 80,000 people who flew into Tokyo as participants. There is still a contentious debate on whether the games were an overall success, but they were not the disaster that many anticipated. wellington the magazine | november 2021