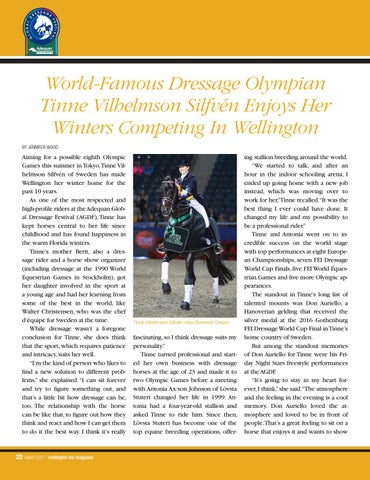 Aiming for a possible eighth Olympic Games this summer in Tokyo, Tinne Vilhelmson Silfvén of Sweden has made Wellington her winter home for the past 10 years. As one of the most respected and high-profile riders at the Adequan Global Dressage Festival (AGDF), Tinne has kept horses central to her life since childhood and has found happiness in the warm Florida winters. Tinne’s mother Berit, also a dressage rider and a horse show organizer (including dressage at the 1990 World Equestrian Games in Stockholm), got her daughter involved in the sport at a young age and had her learning from some of the best in the world, like Walter Christensen, who was the chef d’équipe for Sweden at the time. While dressage wasn’t a foregone conclusion for Tinne, she does think that the sport, which requires patience and intricacy, suits her well. “I’m the kind of person who likes to find a new solution to different problems,” she explained. “I can sit forever and try to figure something out, and that’s a little bit how dressage can be, too. The relationship with the horse can be like that, to figure out how they think and react and how I can get them to do it the best way. I think it’s really

fascinating, so I think dressage suits my personality.” Tinne turned professional and started her own business with dressage horses at the age of 23 and made it to two Olympic Games before a meeting with Antonia Ax:son Johnson of Lövsta Stuteri changed her life in 1999. Antonia had a four-year-old stallion and asked Tinne to ride him. Since then, Lövsta Stuteri has become one of the top equine breeding operations, offer-

ing stallion breeding around the world. “We started to talk, and after an hour in the indoor schooling arena, I ended up going home with a new job instead, which was moving over to work for her,”Tinne recalled.“It was the best thing I ever could have done. It changed my life and my possibility to be a professional rider.” Tinne and Antonia went on to incredible success on the world stage with top performances at eight European Championships, seven FEI Dressage World Cup Finals, five FEI World Equestrian Games and five more Olympic appearances. The standout in Tinne’s long list of talented mounts was Don Auriello, a Hanoverian gelding that received the silver medal at the 2016 Gothenburg FEI Dressage World Cup Final in Tinne’s home country of Sweden. But among the standout memories of Don Auriello for Tinne were his Friday Night Stars freestyle performances at the AGDF. “It’s going to stay in my heart forever, I think,” she said.“The atmosphere and the feeling in the evening is a cool memory. Don Auriello loved the atmosphere and loved to be in front of people.That’s a great feeling to sit on a horse that enjoys it and wants to show