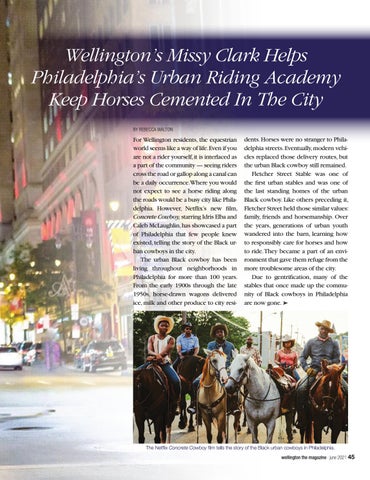 For Wellington residents, the equestrian world seems like a way of life. Even if you are not a rider yourself, it is interlaced as a part of the community — seeing riders cross the road or gallop along a canal can be a daily occurrence.Where you would not expect to see a horse riding along the roads would be a busy city like Philadelphia. However, Netflix’s new film, Concrete Cowboy, starring Idris Elba and Caleb McLaughlin, has showcased a part of Philadelphia that few people knew existed, telling the story of the Black urban cowboys in the city. The urban Black cowboy has been living throughout neighborhoods in Philadelphia for more than 100 years. From the early 1900s through the late 1950s, horse-drawn wagons delivered ice, milk and other produce to city resi-

dents. Horses were no stranger to Philadelphia streets. Eventually, modern vehicles replaced those delivery routes, but the urban Black cowboy still remained. Fletcher Street Stable was one of the first urban stables and was one of the last standing homes of the urban Black cowboy. Like others preceding it, Fletcher Street held those similar values: family, friends and horsemanship. Over the years, generations of urban youth wandered into the barn, learning how to responsibly care for horses and how to ride. They became a part of an environment that gave them refuge from the more troublesome areas of the city. Due to gentrification, many of the stables that once made up the community of Black cowboys in Philadelphia are now gone.

The Netflix Concrete Cowboy film tells the story of the Black urban cowboys in Philadelphia. wellington the magazine | june 2021 45