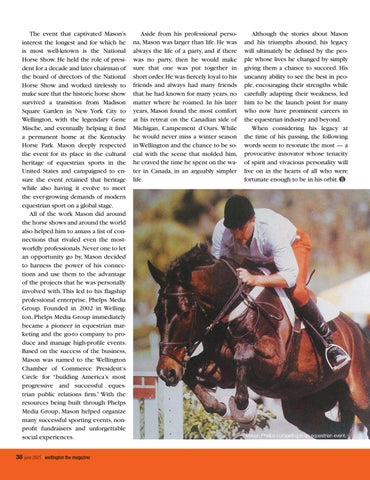 The event that captivated Mason’s interest the longest and for which he is most well-known is the National Horse Show. He held the role of president for a decade and later chairman of the board of directors of the National Horse Show and worked tirelessly to make sure that the historic horse show survived a transition from Madison Square Garden in New York City to Wellington, with the legendary Gene Mische, and eventually helping it find a permanent home at the Kentucky Horse Park. Mason deeply respected the event for its place in the cultural heritage of equestrian sports in the United States and campaigned to ensure the event retained that heritage while also having it evolve to meet the ever-growing demands of modern equestrian sport on a global stage. All of the work Mason did around the horse shows and around the world also helped him to amass a list of connections that rivaled even the mostworldly professionals. Never one to let an opportunity go by, Mason decided to harness the power of his connections and use them to the advantage of the projects that he was personally involved with. This led to his flagship professional enterprise, Phelps Media Group. Founded in 2002 in Wellington, Phelps Media Group immediately became a pioneer in equestrian marketing and the go-to company to produce and manage high-profile events. Based on the success of the business, Mason was named to the Wellington Chamber of Commerce President’s Circle for “building America’s most progressive and successful equestrian public relations firm.” With the resources being built through Phelps Media Group, Mason helped organize many successful sporting events, nonprofit fundraisers and unforgettable social experiences. 38

Aside from his professional persona, Mason was larger than life. He was always the life of a party, and if there was no party, then he would make sure that one was put together in short order. He was fiercely loyal to his friends and always had many friends that he had known for many years, no matter where he roamed. In his later years, Mason found the most comfort at his retreat on the Canadian side of Michigan, Campement d’Ours. While he would never miss a winter season in Wellington and the chance to be social with the scene that molded him, he craved the time he spent on the water in Canada, in an arguably simpler life.

Although the stories about Mason and his triumphs abound, his legacy will ultimately be defined by the people whose lives he changed by simply giving them a chance to succeed. His uncanny ability to see the best in people, encouraging their strengths while carefully adapting their weakness, led him to be the launch point for many who now have prominent careers in the equestrian industry and beyond. When considering his legacy at the time of his passing, the following words seem to resonate the most — a provocative innovator whose tenacity of spirit and vivacious personality will live on in the hearts of all who were fortunate enough to be in his orbit.