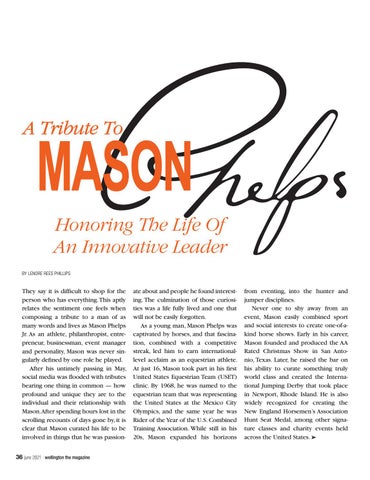 Honoring The Life Of An Innovative Leader BY LENORE REES PHILLIPS

They say it is difficult to shop for the person who has everything. This aptly relates the sentiment one feels when composing a tribute to a man of as many words and lives as Mason Phelps Jr. As an athlete, philanthropist, entrepreneur, businessman, event manager and personality, Mason was never singularly defined by one role he played. After his untimely passing in May, social media was flooded with tributes bearing one thing in common — how profound and unique they are to the individual and their relationship with Mason.After spending hours lost in the scrolling recounts of days gone by, it is clear that Mason curated his life to be involved in things that he was passion36

ate about and people he found interesting. The culmination of those curiosities was a life fully lived and one that will not be easily forgotten. As a young man, Mason Phelps was captivated by horses, and that fascination, combined with a competitive streak, led him to earn internationallevel acclaim as an equestrian athlete. At just 16, Mason took part in his first United States Equestrian Team (USET) clinic. By 1968, he was named to the equestrian team that was representing the United States at the Mexico City Olympics, and the same year he was Rider of the Year of the U.S. Combined Training Association. While still in his 20s, Mason expanded his horizons

from eventing, into the hunter and jumper disciplines. Never one to shy away from an event, Mason easily combined sport and social interests to create one-of-akind horse shows. Early in his career, Mason founded and produced the AA Rated Christmas Show in San Antonio, Texas. Later, he raised the bar on his ability to curate something truly world class and created the International Jumping Derby that took place in Newport, Rhode Island. He is also widely recognized for creating the New England Horsemen’s Association Hunt Seat Medal, among other signature classes and charity events held across the United States.