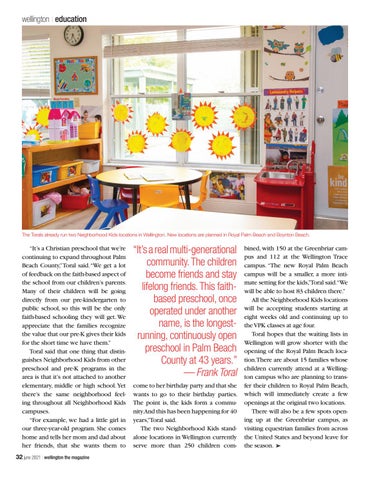 “It’s a Christian preschool that we’re continuing to expand throughout Palm Beach County,” Toral said. “We get a lot of feedback on the faith-based aspect of the school from our children’s parents. Many of their children will be going directly from our pre-kindergarten to public school, so this will be the only faith-based schooling they will get. We appreciate that the families recognize the value that our pre-K gives their kids for the short time we have them.” Toral said that one thing that distinguishes Neighborhood Kids from other preschool and pre-K programs in the area is that it’s not attached to another elementary, middle or high school. Yet there’s the same neighborhood feeling throughout all Neighborhood Kids campuses. “For example, we had a little girl in our three-year-old program. She comes home and tells her mom and dad about her friends, that she wants them to 32 june 2021 | wellington the magazine

“It’s a real multi-generational community. The children become friends and stay lifelong friends. This faithbased preschool, once operated under another name, is the longestrunning, continuously open preschool in Palm Beach County at 43 years.” — Frank Toral come to her birthday party and that she wants to go to their birthday parties. The point is, the kids form a community.And this has been happening for 40 years,”Toral said. The two Neighborhood Kids standalone locations in Wellington currently serve more than 250 children com-

bined, with 150 at the Greenbriar campus and 112 at the Wellington Trace campus. “The new Royal Palm Beach campus will be a smaller, a more intimate setting for the kids,”Toral said.“We will be able to host 83 children there.” All the Neighborhood Kids locations will be accepting students starting at eight weeks old and continuing up to the VPK classes at age four. Toral hopes that the waiting lists in Wellington will grow shorter with the opening of the Royal Palm Beach location.There are about 15 families whose children currently attend at a Wellington campus who are planning to transfer their children to Royal Palm Beach, which will immediately create a few openings at the original two locations. There will also be a few spots opening up at the Greenbriar campus, as visiting equestrian families from across the United States and beyond leave for the season.