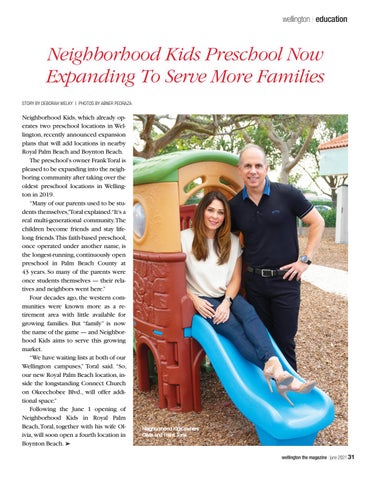 Neighborhood Kids, which already operates two preschool locations in Wellington, recently announced expansion plans that will add locations in nearby Royal Palm Beach and Boynton Beach. The preschool’s owner Frank Toral is pleased to be expanding into the neighboring community after taking over the oldest preschool locations in Wellington in 2019. “Many of our parents used to be students themselves,”Toral explained.“It’s a real multi-generational community. The children become friends and stay lifelong friends.This faith-based preschool, once operated under another name, is the longest-running, continuously open preschool in Palm Beach County at 43 years. So many of the parents were once students themselves — their relatives and neighbors went here.” Four decades ago, the western communities were known more as a retirement area with little available for growing families. But “family” is now the name of the game — and Neighborhood Kids aims to serve this growing market. “We have waiting lists at both of our Wellington campuses,” Toral said. “So, our new Royal Palm Beach location, inside the longstanding Connect Church on Okeechobee Blvd., will offer additional space.” Following the June 1 opening of Neighborhood Kids in Royal Palm Beach, Toral, together with his wife Olivia, will soon open a fourth location in Boynton Beach.