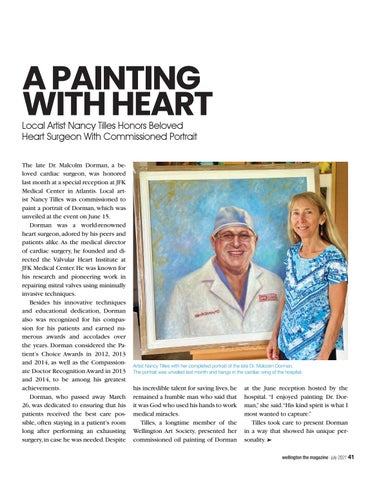 A PAINTING WITH HEART Local Artist Nancy Tilles Honors Beloved Heart Surgeon With Commissioned Portrait The late Dr. Malcolm Dorman, a beloved cardiac surgeon, was honored last month at a special reception at JFK Medical Center in Atlantis. Local artist Nancy Tilles was commissioned to paint a portrait of Dorman, which was unveiled at the event on June 15. Dorman was a world-renowned heart surgeon, adored by his peers and patients alike. As the medical director of cardiac surgery, he founded and directed the Valvular Heart Institute at JFK Medical Center. He was known for his research and pioneering work in repairing mitral valves using minimally invasive techniques. Besides his innovative techniques and educational dedication, Dorman also was recognized for his compassion for his patients and earned numerous awards and accolades over the years. Dorman considered the Patient’s Choice Awards in 2012, 2013 and 2014, as well as the Compassionate Doctor Recognition Award in 2013 and 2014, to be among his greatest achievements. Dorman, who passed away March 26, was dedicated to ensuring that his patients received the best care possible, often staying in a patient’s room long after performing an exhausting surgery, in case he was needed. Despite

Artist Nancy Tilles with her completed portrait of the late Dr. Malcolm Dorman. The portrait was unveiled last month and hangs in the cardiac wing of the hospital.

his incredible talent for saving lives, he remained a humble man who said that it was God who used his hands to work medical miracles. Tilles, a longtime member of the Wellington Art Society, presented her commissioned oil painting of Dorman

at the June reception hosted by the hospital. “I enjoyed painting Dr. Dorman,” she said.“His kind spirit is what I most wanted to capture.” Tilles took care to present Dorman in a way that showed his unique personality. wellington the magazine | july 2021 41

July 2021 ON THE COVER Wellington Swim Club member Lenore Phillips. The club is featured in this month’s issue. | Wellington Takes Home Its...

July 2021 ON THE COVER Wellington Swim Club member Lenore Phillips. The club is featured in this month’s issue. | Wellington Takes Home Its...