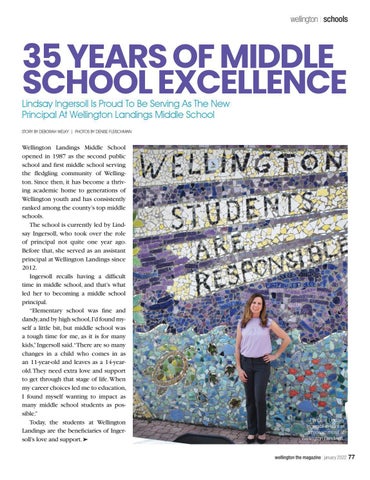 Wellington Landings Middle School opened in 1987 as the second public school and first middle school serving the fledgling community of Wellington. Since then, it has become a thriving academic home to generations of Wellington youth and has consistently ranked among the county’s top middle schools. The school is currently led by Lindsay Ingersoll, who took over the role of principal not quite one year ago. Before that, she served as an assistant principal at Wellington Landings since 2012. Ingersoll recalls having a difficult time in middle school, and that’s what led her to becoming a middle school principal. “Elementary school was fine and dandy, and by high school, I’d found myself a little bit, but middle school was a tough time for me, as it is for many kids,” Ingersoll said.“There are so many changes in a child who comes in as an 11-year-old and leaves as a 14-yearold. They need extra love and support to get through that stage of life. When my career choices led me to education, I found myself wanting to impact as many middle school students as possible.” Today, the students at Wellington Landings are the beneficiaries of Ingersoll’s love and support.

Principal Lindsay Ingersoll in front of a mosaic mural at Wellington Landings.