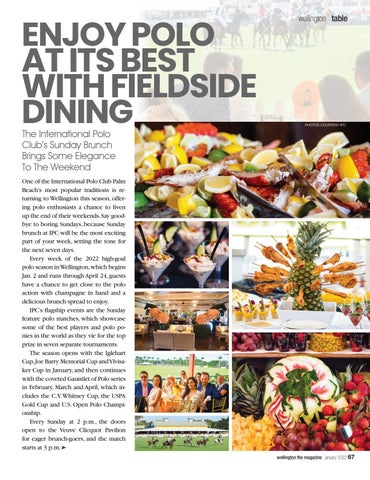 ENJOY POLO AT ITS BEST WITH FIELDSIDE DINING

One of the International Polo Club Palm Beach’s most popular traditions is returning to Wellington this season, offering polo enthusiasts a chance to liven up the end of their weekends. Say goodbye to boring Sundays, because Sunday brunch at IPC will be the most exciting part of your week, setting the tone for the next seven days. Every week of the 2022 high-goal polo season in Wellington, which begins Jan. 2 and runs through April 24, guests have a chance to get close to the polo action with champagne in hand and a delicious brunch spread to enjoy. IPC’s flagship events are the Sunday feature polo matches, which showcase some of the best players and polo ponies in the world as they vie for the top prize in seven separate tournaments. The season opens with the Iglehart Cup, Joe Barry Memorial Cup and Ylvisaker Cup in January, and then continues with the coveted Gauntlet of Polo series in February, March and April, which includes the C.V. Whitney Cup, the USPA Gold Cup and U.S. Open Polo Championship. Every Sunday at 2 p.m., the doors open to the Veuve Clicquot Pavilion for eager brunch-goers, and the match starts at 3 p.m. wellington the magazine | january 2022 67