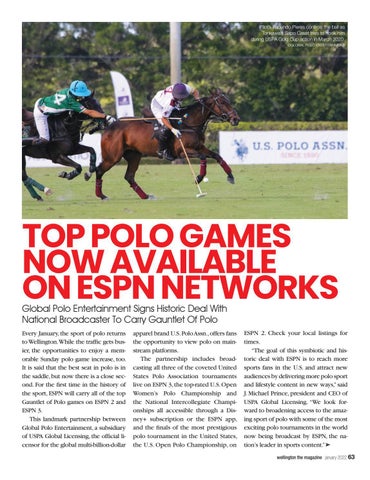 TOP POLO GAMES NOW AVAILABLE ON ESPN NETWORKS Global Polo Entertainment Signs Historic Deal With National Broadcaster To Carry Gauntlet Of Polo Every January, the sport of polo returns to Wellington.While the traffic gets busier, the opportunities to enjoy a memorable Sunday polo game increase, too. It is said that the best seat in polo is in the saddle, but now there is a close second. For the first time in the history of the sport, ESPN will carry all of the top Gauntlet of Polo games on ESPN 2 and ESPN 3. This landmark partnership between Global Polo Entertainment, a subsidiary of USPA Global Licensing, the official licensor for the global multi-billion-dollar

apparel brand U.S. Polo Assn., offers fans the opportunity to view polo on mainstream platforms. The partnership includes broadcasting all three of the coveted United States Polo Association tournaments live on ESPN 3, the top-rated U.S. Open Women’s Polo Championship and the National Intercollegiate Championships all accessible through a Disney+ subscription or the ESPN app, and the finals of the most prestigious polo tournament in the United States, the U.S. Open Polo Championship, on

ESPN 2. Check your local listings for times. “The goal of this symbiotic and historic deal with ESPN is to reach more sports fans in the U.S. and attract new audiences by delivering more polo sport and lifestyle content in new ways,” said J. Michael Prince, president and CEO of USPA Global Licensing. “We look forward to broadening access to the amazing sport of polo with some of the most exciting polo tournaments in the world now being broadcast by ESPN, the nation’s leader in sports content.” wellington the magazine | january 2022 63