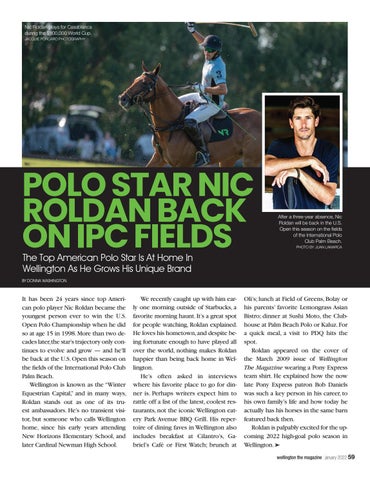 After a three-year absence, Nic Roldan will be back in the U.S. Open this season on the fields of the International Polo Club Palm Beach. PHOTO BY JUAN LAMARCA

It has been 24 years since top American polo player Nic Roldan became the youngest person ever to win the U.S. Open Polo Championship when he did so at age 15 in 1998. More than two decades later, the star’s trajectory only continues to evolve and grow — and he’ll be back at the U.S. Open this season on the fields of the International Polo Club Palm Beach. Wellington is known as the “Winter Equestrian Capital,” and in many ways, Roldan stands out as one of its truest ambassadors. He’s no transient visitor, but someone who calls Wellington home, since his early years attending New Horizons Elementary School, and later Cardinal Newman High School.

We recently caught up with him early one morning outside of Starbucks, a favorite morning haunt. It’s a great spot for people watching, Roldan explained. He loves his hometown, and despite being fortunate enough to have played all over the world, nothing makes Roldan happier than being back home in Wellington. He’s often asked in interviews where his favorite place to go for dinner is. Perhaps writers expect him to rattle off a list of the latest, coolest restaurants, not the iconic Wellington eatery Park Avenue BBQ Grill. His repertoire of dining faves in Wellington also includes breakfast at Cilantro’s, Gabriel’s Café or First Watch; brunch at

Oli’s; lunch at Field of Greens, Bolay or his parents’ favorite Lemongrass Asian Bistro; dinner at Sushi Moto, the Clubhouse at Palm Beach Polo or Kaluz. For a quick meal, a visit to PDQ hits the spot. Roldan appeared on the cover of the March 2009 issue of Wellington The Magazine wearing a Pony Express team shirt. He explained how the now late Pony Express patron Bob Daniels was such a key person in his career, to his own family’s life and how today he actually has his horses in the same barn featured back then. Roldan is palpably excited for the upcoming 2022 high-goal polo season in Wellington. wellington the magazine | january 2022 59