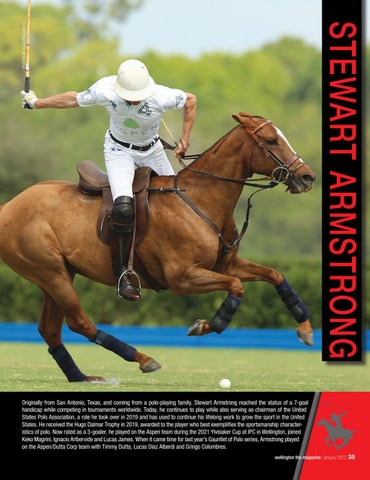 Originally from San Antonio, Texas, and coming from a polo-playing family, Stewart Armstrong reached the status of a 7-goal handicap while competing in tournaments worldwide. Today, he continues to play while also serving as chairman of the United States Polo Association, a role he took over in 2019 and has used to continue his lifelong work to grow the sport in the United States. He received the Hugo Dalmar Trophy in 2019, awarded to the player who best exemplifies the sportsmanship characteristics of polo. Now rated as a 3-goaler, he played on the Aspen team during the 2021 Ylvisaker Cup at IPC in Wellington, joined Keko Magrini, Ignacio Arlbervide and Lucas James. When it came time for last year’s Gauntlet of Polo series, Armstrong played on the Aspen/Dutta Corp team with Timmy Dutta, Lucas Diaz Alberdi and Gringo Colombres. wellington the magazine | january 2022