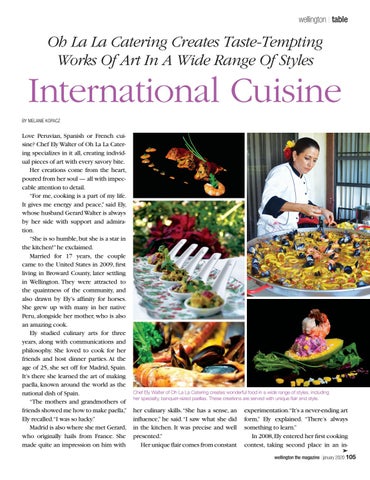 Love Peruvian, Spanish or French cuisine? Chef Ely Walter of Oh La La Catering specializes in it all, creating individual pieces of art with every savory bite. Her creations come from the heart, poured from her soul — all with impeccable attention to detail. “For me, cooking is a part of my life. It gives me energy and peace,” said Ely, whose husband Gerard Walter is always by her side with support and admiration. “She is so humble, but she is a star in the kitchen!” he exclaimed. Married for 17 years, the couple came to the United States in 2009, first living in Broward County, later settling in Wellington. They were attracted to the quaintness of the community, and also drawn by Ely’s affinity for horses. She grew up with many in her native Peru, alongside her mother, who is also an amazing cook. Ely studied culinary arts for three years, along with communications and philosophy. She loved to cook for her friends and host dinner parties. At the age of 25, she set off for Madrid, Spain. It’s there she learned the art of making paella, known around the world as the national dish of Spain. “The mothers and grandmothers of friends showed me how to make paella,” Ely recalled.“I was so lucky.” Madrid is also where she met Gerard, who originally hails from France. She made quite an impression on him with

Chef Ely Walter of Oh La La Catering creates wonderful food in a wide range of styles, including her specialty, banquet-sized paellas. These creations are served with unique flair and style.

her culinary skills. “She has a sense, an influence,” he said. “I saw what she did in the kitchen. It was precise and well presented.” Her unique flair comes from constant

January 2020 | ON THE COVER Polo 10-goaler Facundo Pieres, profiled this issue, in action on the polo field. Photo by Alex Pacheco | High-Go...

January 2020 | ON THE COVER Polo 10-goaler Facundo Pieres, profiled this issue, in action on the polo field. Photo by Alex Pacheco | High-Go...