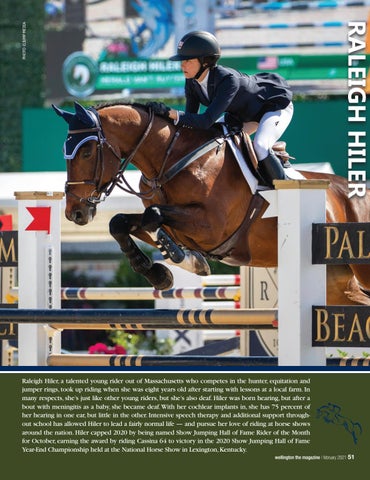 Raleigh Hiler, a talented young rider out of Massachusetts who competes in the hunter, equitation and jumper rings, took up riding when she was eight years old after starting with lessons at a local farm. In many respects, she’s just like other young riders, but she’s also deaf. Hiler was born hearing, but after a bout with meningitis as a baby, she became deaf. With her cochlear implants in, she has 75 percent of her hearing in one ear, but little in the other. Intensive speech therapy and additional support throughout school has allowed Hiler to lead a fairly normal life — and pursue her love of riding at horse shows around the nation. Hiler capped 2020 by being named Show Jumping Hall of Fame Rider of the Month for October, earning the award by riding Cassina 64 to victory in the 2020 Show Jumping Hall of Fame Year-End Championship held at the National Horse Show in Lexington, Kentucky.