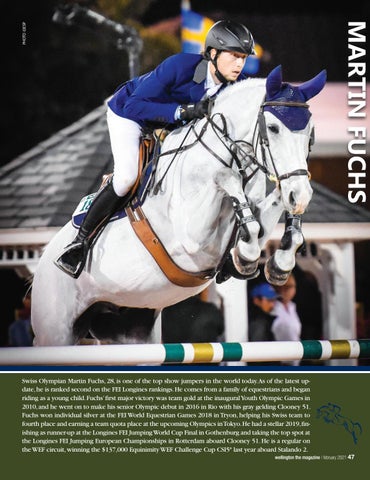 Swiss Olympian Martin Fuchs, 28, is one of the top show jumpers in the world today. As of the latest update, he is ranked second on the FEI Longines rankings. He comes from a family of equestrians and began riding as a young child. Fuchsâ&#x20AC;&#x2122; first major victory was team gold at the inaugural Youth Olympic Games in 2010, and he went on to make his senior Olympic debut in 2016 in Rio with his gray gelding Clooney 51. Fuchs won individual silver at the FEI World Equestrian Games 2018 in Tryon, helping his Swiss team to fourth place and earning a team quota place at the upcoming Olympics in Tokyo. He had a stellar 2019, finishing as runner-up at the Longines FEI Jumping World Cup Final in Gothenburg and taking the top spot at the Longines FEI Jumping European Championships in Rotterdam aboard Clooney 51. He is a regular on the WEF circuit, winning the $137,000 Equinimity WEF Challenge Cup CSI5* last year aboard Stalando 2.