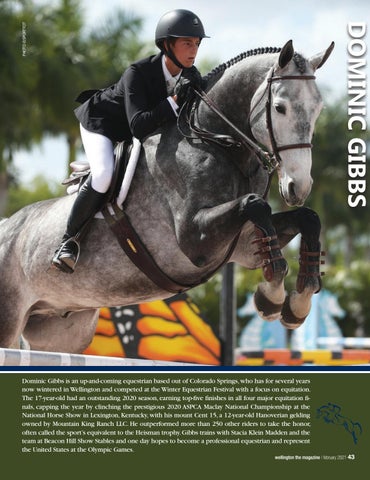 Dominic Gibbs is an up-and-coming equestrian based out of Colorado Springs, who has for several years now wintered in Wellington and competed at the Winter Equestrian Festival with a focus on equitation. The 17-year-old had an outstanding 2020 season, earning top-five finishes in all four major equitation finals, capping the year by clinching the prestigious 2020 ASPCA Maclay National Championship at the National Horse Show in Lexington, Kentucky, with his mount Cent 15, a 12-year-old Hanoverian gelding owned by Mountain King Ranch LLC. He outperformed more than 250 other riders to take the honor, often called the sportâ&#x20AC;&#x2122;s equivalent to the Heisman trophy. Gibbs trains with Stacia Klein Madden and the team at Beacon Hill Show Stables and one day hopes to become a professional equestrian and represent the United States at the Olympic Games.