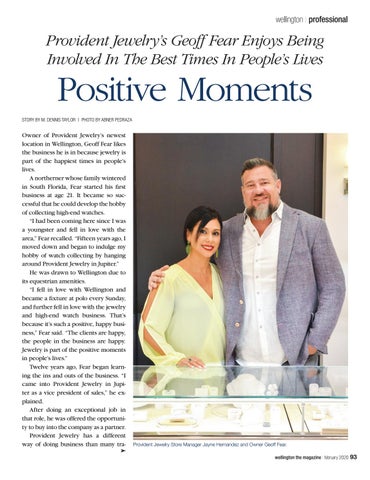 Owner of Provident Jewelry’s newest location in Wellington, Geoff Fear likes the business he is in because jewelry is part of the happiest times in people’s lives. A northerner whose family wintered in South Florida, Fear started his first business at age 21. It became so successful that he could develop the hobby of collecting high-end watches. “I had been coming here since I was a youngster and fell in love with the area,” Fear recalled. “Fifteen years ago, I moved down and began to indulge my hobby of watch collecting by hanging around Provident Jewelry in Jupiter.” He was drawn to Wellington due to its equestrian amenities. “I fell in love with Wellington and became a fixture at polo every Sunday, and further fell in love with the jewelry and high-end watch business. That’s because it’s such a positive, happy business,” Fear said. “The clients are happy, the people in the business are happy. Jewelry is part of the positive moments in people’s lives.” Twelve years ago, Fear began learning the ins and outs of the business. “I came into Provident Jewelry in Jupiter as a vice president of sales,” he explained. After doing an exceptional job in that role, he was offered the opportunity to buy into the company as a partner. Provident Jewelry has a different way of doing business than many tra-

February 2020 | ON THE COVER Show jumping rising star Alex Granato, who is profiled this issue. Photo ©PBIEC | PBIEC Welcomes Back Jumping A...

February 2020 | ON THE COVER Show jumping rising star Alex Granato, who is profiled this issue. Photo ©PBIEC | PBIEC Welcomes Back Jumping A...