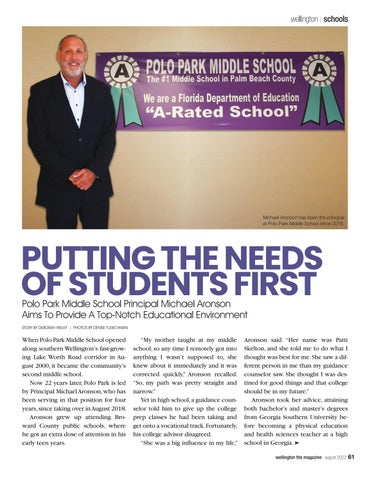 Michael Aronson has been the principal at Polo Park Middle School since 2018.

When Polo Park Middle School opened along southern Wellington’s fast-growing Lake Worth Road corridor in August 2000, it became the community’s second middle school. Now 22 years later, Polo Park is led by Principal Michael Aronson, who has been serving in that position for four years, since taking over in August 2018. Aronson grew up attending Broward County public schools, where he got an extra dose of attention in his early teen years.

“My mother taught at my middle school, so any time I remotely got into anything I wasn’t supposed to, she knew about it immediately and it was corrected quickly,” Aronson recalled. “So, my path was pretty straight and narrow.” Yet in high school, a guidance counselor told him to give up the college prep classes he had been taking and get onto a vocational track. Fortunately, his college advisor disagreed. “She was a big influence in my life,”

Aronson said. “Her name was Patti Skelton, and she told me to do what I thought was best for me. She saw a different person in me than my guidance counselor saw. She thought I was destined for good things and that college should be in my future.” Aronson took her advice, attaining both bachelor’s and master’s degrees from Georgia Southern University before becoming a physical education and health sciences teacher at a high school in Georgia. wellington the magazine | august 2022