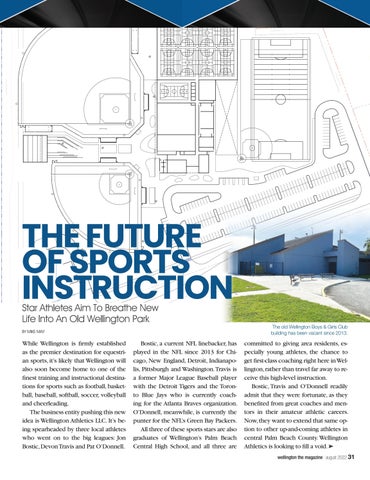 While Wellington is firmly established as the premier destination for equestrian sports, it’s likely that Wellington will also soon become home to one of the finest training and instructional destinations for sports such as football, basketball, baseball, softball, soccer, volleyball and cheerleading. The business entity pushing this new idea is Wellington Athletics LLC. It’s being spearheaded by three local athletes who went on to the big leagues: Jon Bostic, Devon Travis and Pat O’Donnell.

Bostic, a current NFL linebacker, has played in the NFL since 2013 for Chicago, New England, Detroit, Indianapolis, Pittsburgh and Washington. Travis is a former Major League Baseball player with the Detroit Tigers and the Toronto Blue Jays who is currently coaching for the Atlanta Braves organization. O’Donnell, meanwhile, is currently the punter for the NFL’s Green Bay Packers. All three of these sports stars are also graduates of Wellington’s Palm Beach Central High School, and all three are

The old Wellington Boys &amp; Girls Club building has been vacant since 2013.

committed to giving area residents, especially young athletes, the chance to get first-class coaching right here in Wellington, rather than travel far away to receive this high-level instruction. Bostic, Travis and O’Donnell readily admit that they were fortunate, as they benefited from great coaches and mentors in their amateur athletic careers. Now, they want to extend that same option to other up-and-coming athletes in central Palm Beach County. Wellington Athletics is looking to fill a void. wellington the magazine | august 2022 31