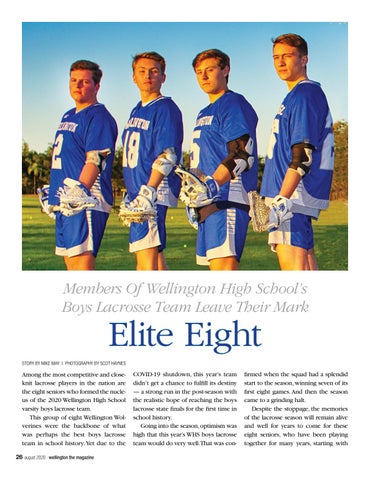 STORY BY MIKE MAY | PHOTOGRAPHY BY SCOT HAYNES

Among the most competitive and closeknit lacrosse players in the nation are the eight seniors who formed the nucleus of the 2020 Wellington High School varsity boys lacrosse team. This group of eight Wellington Wolverines were the backbone of what was perhaps the best boys lacrosse team in school history. Yet due to the 26

COVID-19 shutdown, this year’s team didn’t get a chance to fulfill its destiny — a strong run in the post-season with the realistic hope of reaching the boys lacrosse state finals for the first time in school history. Going into the season, optimism was high that this year’s WHS boys lacrosse team would do very well.That was con-

firmed when the squad had a splendid start to the season, winning seven of its first eight games. And then the season came to a grinding halt. Despite the stoppage, the memories of the lacrosse season will remain alive and well for years to come for these eight seniors, who have been playing together for many years, starting with

August 2020 | ON THE COVER The 11 principals of Wellington’s A-rated public schools gather for a group photo. Photo by Ken D’Agostino/Villa...

August 2020 | ON THE COVER The 11 principals of Wellington’s A-rated public schools gather for a group photo. Photo by Ken D’Agostino/Villa...