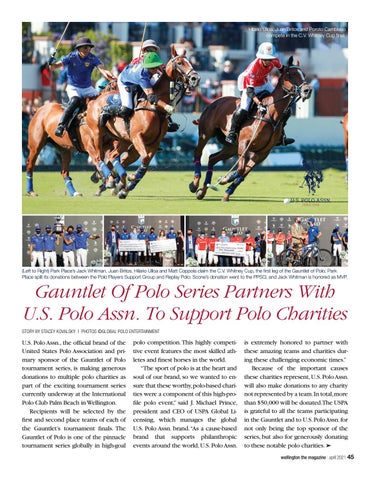 polo competition. This highly competitive event features the most skilled athletes and finest horses in the world. “The sport of polo is at the heart and soul of our brand, so we wanted to ensure that these worthy, polo-based charities were a component of this high-profile polo event,” said J. Michael Prince, president and CEO of USPA Global Licensing, which manages the global U.S. Polo Assn. brand. “As a cause-based brand that supports philanthropic events around the world, U.S. Polo Assn.

is extremely honored to partner with these amazing teams and charities during these challenging economic times.” Because of the important causes these charities represent, U.S. Polo Assn. will also make donations to any charity not represented by a team. In total, more than $50,000 will be donated.The USPA is grateful to all the teams participating in the Gauntlet and to U.S. Polo Assn. for not only being the top sponsor of the series, but also for generously donating to these notable polo charities. wellington the magazine | april 2021 45