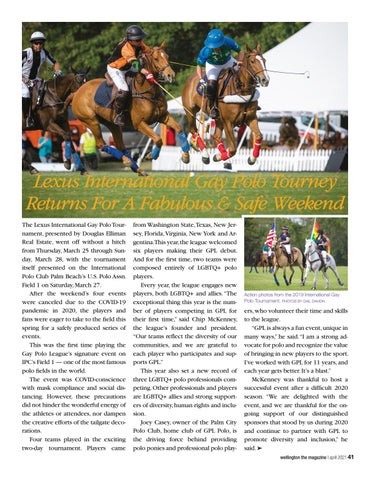 Lexus International Gay Polo Tourney Returns For A Fabulous & Safe Weekend The Lexus International Gay Polo Tournament, presented by Douglas Elliman Real Estate, went off without a hitch from Thursday, March 25 through Sunday, March 28, with the tournament itself presented on the International Polo Club Palm Beach’s U.S. Polo Assn. Field 1 on Saturday, March 27. After the weekend’s four events were canceled due to the COVID-19 pandemic in 2020, the players and fans were eager to take to the field this spring for a safely produced series of events. This was the first time playing the Gay Polo League’s signature event on IPC’s Field 1 — one of the most famous polo fields in the world. The event was COVID-conscience with mask compliance and social distancing. However, these precautions did not hinder the wonderful energy of the athletes or attendees, nor dampen the creative efforts of the tailgate decorations. Four teams played in the exciting two-day tournament. Players came

from Washington State, Texas, New Jersey, Florida, Virginia, New York and Argentina.This year, the league welcomed six players making their GPL debut. And for the first time, two teams were composed entirely of LGBTQ+ polo players. Every year, the league engages new players, both LGBTQ+ and allies. “The exceptional thing this year is the number of players competing in GPL for their first time,” said Chip McKenney, the league’s founder and president. “Our teams reflect the diversity of our communities, and we are grateful to each player who participates and supports GPL.” This year also set a new record of three LGBTQ+ polo professionals competing. Other professionals and players are LGBTQ+ allies and strong supporters of diversity, human rights and inclusion. Joey Casey, owner of the Palm City Polo Club, home club of GPL Polo, is the driving force behind providing polo ponies and professional polo play-

ers, who volunteer their time and skills to the league. “GPL is always a fun event, unique in many ways,” he said. “I am a strong advocate for polo and recognize the value of bringing in new players to the sport. I’ve worked with GPL for 11 years, and each year gets better. It’s a blast.” McKenney was thankful to host a successful event after a difficult 2020 season. “We are delighted with the event, and we are thankful for the ongoing support of our distinguished sponsors that stood by us during 2020 and continue to partner with GPL to promote diversity and inclusion,” he said. wellington the magazine | april 2021 41