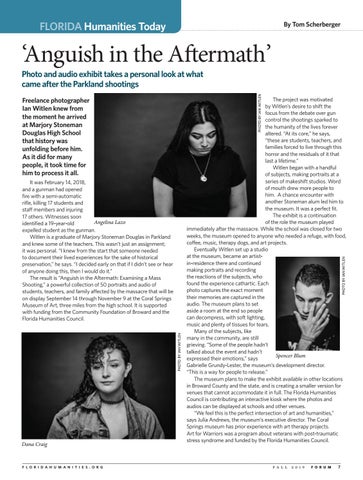 ‘Anguish in the Aftermath’ PHOTO BY IAN WITLEN

Photo and audio exhibit takes a personal look at what came after the Parkland shootings Freelance photographer Ian Witlen knew from the moment he arrived at Marjory Stoneman Douglas High School that history was unfolding before him. As it did for many people, it took time for him to process it all.

It was February 14, 2018, and a gunman had opened fire with a semi-automatic rifle, killing 17 students and staff members and injuring 17 others. Witnesses soon Angelina Lazo identified a 19-year-old expelled student as the gunman. Witlen is a graduate of Marjory Stoneman Douglas in Parkland and knew some of the teachers. This wasn’t just an assignment; it was personal. “I knew from the start that someone needed to document their lived experiences for the sake of historical preservation,” he says. “I decided early on that if I didn’t see or hear of anyone doing this, then I would do it.” The result is “Anguish in the Aftermath: Examining a Mass Shooting,” a powerful collection of 50 portraits and audio of students, teachers, and family affected by the massacre that will be on display September 14 through November 9 at the Coral Springs Museum of Art, three miles from the high school. It is supported with funding from the Community Foundation of Broward and the Florida Humanities Council.

The project was motivated by Witlen’s desire to shift the focus from the debate over gun control the shootings sparked to the humanity of the lives forever altered. “At its core,” he says, “these are students, teachers, and families forced to live through this horror and the residuals of it that last a lifetime.” Witlen began with a handful of subjects, making portraits at a series of makeshift studios. Word of mouth drew more people to him. A chance encounter with another Stoneman alum led him to the museum. It was a perfect fit. The exhibit is a continuation of the role the museum played immediately after the massacre. While the school was closed for two weeks, the museum opened to anyone who needed a refuge, with food, coffee, music, therapy dogs, and art projects. Eventually Witlen set up a studio at the museum, became an artistin-residence there and continued making portraits and recording the reactions of the subjects, who found the experience cathartic. Each photo captures the exact moment their memories are captured in the audio. The museum plans to set aside a room at the end so people can decompress, with soft lighting, music and plenty of tissues for tears. Many of the subjects, like many in the community, are still grieving. “Some of the people hadn’t talked about the event and hadn’t Spencer Blum expressed their emotions,” says Gabrielle Grundy-Lester, the museum’s development director. “This is a way for people to release.” The museum plans to make the exhibit available in other locations in Broward County and the state, and is creating a smaller version for venues that cannot accommodate it in full. The Florida Humanities Council is contributing an interactive kiosk where the photos and audios can be displayed at schools and other venues. “We feel this is the perfect intersection of art and humanities,” says Julia Andrews, the museum’s executive director. The Coral Springs museum has prior experience with art therapy projects. Art for Warriors was a program about veterans with post-traumatic stress syndrome and funded by the Florida Humanities Council. 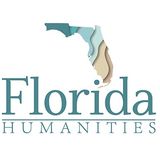 Historian Gary Mormino recounts Florida’s version of the “American Century.” Ron Cunningham looks to Florida’s future challenges. And in our...

Historian Gary Mormino recounts Florida’s version of the “American Century.” Ron Cunningham looks to Florida’s future challenges. And in our...