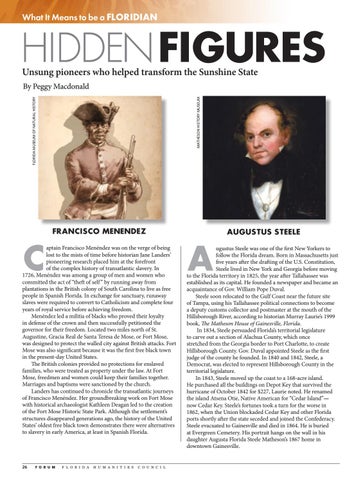 What It Means to be a FLORIDIAN

aptain Francisco Menéndez was on the verge of being lost to the mists of time before historian Jane Landers’ pioneering research placed him at the forefront of the complex history of transatlantic slavery. In 1726, Menéndez was among a group of men and women who committed the act of “theft of self ” by running away from plantations in the British colony of South Carolina to live as free people in Spanish Florida. In exchange for sanctuary, runaway slaves were required to convert to Catholicism and complete four years of royal service before achieving freedom. Menéndez led a militia of blacks who proved their loyalty in defense of the crown and then successfully petitioned the governor for their freedom. Located two miles north of St. Augustine, Gracia Real de Santa Teresa de Mose, or Fort Mose, was designed to protect the walled city against British attacks. Fort Mose was also significant because it was the first free black town in the present-day United States. The British colonies provided no protections for enslaved families, who were treated as property under the law. At Fort Mose, freedmen and women could keep their families together. Marriages and baptisms were sanctioned by the church. Landers has continued to chronicle the transatlantic journeys of Francisco Menéndez. Her groundbreaking work on Fort Mose with historical archaeologist Kathleen Deagan led to the creation of the Fort Mose Historic State Park. Although the settlement’s structures disappeared generations ago, the history of the United States’ oldest free black town demonstrates there were alternatives to slavery in early America, at least in Spanish Florida.

ugustus Steele was one of the first New Yorkers to follow the Florida dream. Born in Massachusetts just five years after the drafting of the U.S. Constitution, Steele lived in New York and Georgia before moving to the Florida territory in 1825, the year after Tallahassee was established as its capital. He founded a newspaper and became an acquaintance of Gov. William Pope Duval. Steele soon relocated to the Gulf Coast near the future site of Tampa, using his Tallahassee political connections to become a deputy customs collector and postmaster at the mouth of the Hillsborough River, according to historian Murray Laurie’s 1999 book, The Matheson House of Gainesville, Florida. In 1834, Steele persuaded Florida’s territorial legislature to carve out a section of Alachua County, which once stretched from the Georgia border to Port Charlotte, to create Hillsborough County. Gov. Duval appointed Steele as the first judge of the county he founded. In 1840 and 1842, Steele, a Democrat, was elected to represent Hillsborough County in the territorial legislature. In 1843, Steele moved up the coast to a 168-acre island. He purchased all the buildings on Depot Key that survived the hurricane of October 1842 for $227, Laurie noted. He renamed the island Atsena Otie, Native American for “Cedar Island”— now Cedar Key. Steele’s fortunes took a turn for the worse in 1862, when the Union blockaded Cedar Key and other Florida ports shortly after the state seceded and joined the Confederacy. Steele evacuated to Gainesville and died in 1864. He is buried at Evergreen Cemetery. His portrait hangs on the wall in his daughter Augusta Florida Steele Matheson’s 1867 home in downtown Gainesville.