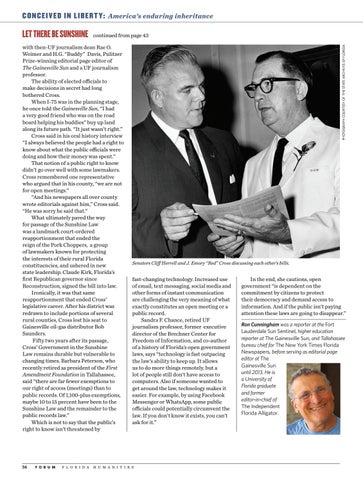 with then-UF journalism dean Rae O. Weimer and H.G. “Buddy” Davis, Pulitzer Prize-winning editorial page editor of The Gainesville Sun and a UF journalism professor. The ability of elected officials to make decisions in secret had long bothered Cross. When I-75 was in the planning stage, he once told the Gainesville Sun, “I had a very good friend who was on the road board helping his buddies” buy up land along its future path. “It just wasn’t right.” Cross said in his oral history interview “I always believed the people had a right to know about what the public officials were doing and how their money was spent.” That notion of a public right to know didn’t go over well with some lawmakers. Cross remembered one representative who argued that in his county, “we are not for open meetings.” “And his newspapers all over county wrote editorials against him,” Cross said. “He was sorry he said that.” What ultimately paved the way for passage of the Sunshine Law was a landmark court-ordered reapportionment that ended the reign of the Pork Choppers, a group of lawmakers known for protecting the interests of their rural Florida constituencies, and ushered in new state leadership. Claude Kirk, Florida’s first Republican governor since Reconstruction, signed the bill into law. Ironically, it was that same reapportionment that ended Cross’ legislative career. After his district was redrawn to include portions of several rural counties, Cross lost his seat to Gainesville oil-gas distributor Bob Saunders. Fifty two years after its passage, Cross’ Government in the Sunshine Law remains durable but vulnerable to changing times. Barbara Peterson, who recently retired as president of the First Amendment Foundation in Tallahassee, said “there are far fewer exemptions to our right of access (meetings) than to public records. Of 1,100-plus exemptions, maybe 10 to 15 percent have been to the Sunshine Law and the remainder to the public records law.” Which is not to say that the public’s right to know isn’t threatened by

LET THERE BE SUNSHINE

fast-changing technology. Increased use of email, text messaging, social media and other forms of instant communication are challenging the very meaning of what exactly constitutes an open meeting or a public record. Sandra F. Chance, retired UF journalism professor, former executive director of the Brechner Center for Freedom of Information, and co-author of a history of Florida’s open government laws, says “technology is fast outpacing the law’s ability to keep up. It allows us to do more things remotely, but a lot of people still don’t have access to computers. Also if someone wanted to get around the law, technology makes it easier. For example, by using Facebook Messenger or WhatsApp, some public officials could potentially circumvent the law. If you don’t know it exists, you can’t ask for it.”

In the end, she cautions, open government “is dependent on the commitment by citizens to protect their democracy and demand access to information. And if the public isn’t paying attention these laws are going to disappear.” Ron Cunningham was a reporter at the Fort Lauderdale Sun Sentinel, higher education reporter at The Gainesville Sun, and Tallahassee bureau chief for The New York Times Florida Newspapers, before serving as editorial page editor at The Gainesville Sun until 2013. He is a University of Florida graduate and former editor-in-chief of The Independent Florida Alligator.