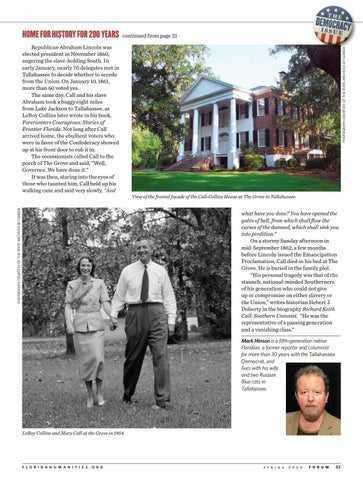 Republican Abraham Lincoln was elected president in November 1860, angering the slave-holding South. In early January, nearly 70 delegates met in Tallahassee to decide whether to secede from the Union. On January 10, 1861, more than 60 voted yes. The same day, Call and his slave Abraham took a buggy eight miles from Lake Jackson to Tallahassee, as LeRoy Collins later wrote in his book, Forerunners Courageous: Stories of Frontier Florida. Not long after Call arrived home, the ebullient voters who were in favor of the Confederacy showed up at his front door to rub it in. The secessionists called Call to the porch of The Grove and said, “Well, Governor. We have done it.” It was then, staring into the eyes of those who taunted him, Call held up his walking cane and said very slowly, “And

HOME FOR HISTORY FOR 200 YEARS

View of the frontal facade of the Call-Collins House at The Grove in Tallahassee.

what have you done? You have opened the gates of hell, from which shall flow the curses of the damned, which shall sink you into perdition.” On a stormy Sunday afternoon in mid-September 1862, a few months before Lincoln issued the Emancipation Proclamation, Call died in his bed at The Grove. He is buried in the family plot. “His personal tragedy was that of the staunch, national-minded Southerners of his generation who could not give up or compromise on either slavery or the Union,” writes historian Hebert J. Doherty in the biography Richard Keith Call: Southern Unionist. “He was the representative of a passing generation and a vanishing class.” Mark Hinson is a fifth-generation native Floridian, a former reporter and columnist for more than 30 years with the Tallahassee Democrat, and lives with his wife and two Russian Blue cats in Tallahassee.

LeRoy Collins and Mary Call at the Grove in 1954.